Los Angeles City Councilman Mitch O’Farrell and the cast of “On Your Feet” hosted a “Hollywood-style” ceremony on July 12 to introduce a new scramble crosswalk at the intersection of Hollywood Boulevard and Vine Street.

Scramble crosswalks stop all traffic at four-way intersections and allow pedestrians to cross diagonally, in addition to the standard east-west and north-south crossings. O’Farrell and cast members of “On Your Feet,” the Broadway musical about the life of Gloria Estefan, currently playing at the Hollywood Pantages Theatre, led conga lines across the intersections during the 30-second stoppages for pedestrian crossings

Hollywood’s first scramble crosswalk debuted at the intersection of Hollywood Boulevard and Highland Avenue almost two years ago. In 2017, there were 134 pedestrian fatalities in the city of Los Angeles, O’Farrell said, and 192 traffic collisions between cars and pedestrians in LAPD’s Hollywood Division coverage area. In 2018, there were only 84 such collisions, with 37 percent occurring in crosswalks. 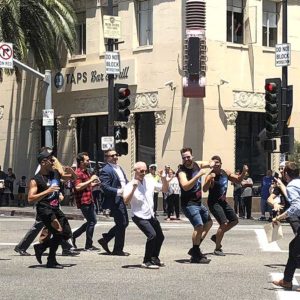 “Since Hollywood’s Golden Age, this intersection has remained the epicenter of where dreams come true,” said Jeff Loeb, general manager of the Pantages. “What better way to welcome the second scramble crosswalk to Hollywood than to get ‘On Your Feet’ and conga across that intersection in any direction you want?”

Dan Mitchell, a chief engineer for the Los Angeles Department of Transportation, called the crosswalk “a new chapter in the life of this iconic intersection.”

“Hollywood is a place where miracles happen and dreams come true,” he said. “But you can’t achieve your dreams if you can’t make it across the street in one piece.”

The Mid City West Community Council took a step last week to bring a scramble crosswalk to the intersection of Third Street and Fairfax Avenue. The intersection was the third most frequent site of collisions from 2015-2017 in the city of Los Angeles, according to data compiled by UC Berkeley.

“The community response on this has just been tremendous,” said Scott Epstein, Mid City West’s chairman.

“I love the idea of a pedestrian scramble at Third and Fairfax as a way to increase safety and encourage the community to walk around the iconic locations of the area,” Ryu said. “I am glad to see there’s a lot of community support, and I look forward to discussing this further with the community as well as the Department of Transportation.”

Ali Simard, a spokeswoman for Koretz, said the councilman is open to the idea as well, pending a further evaluation by the city.

“We hope it will be enthusiastically embraced by the city,” Epstein said.

Ending homelessness at the grassroots level

[…] Last week, the Hollywood/Highland scramble was joined by a new diagonal crossing nine blocks east at the intersection of Hollywood and Vine Street. The city also added a triple scramble last year along MacArthur Park. […]