Mayor Eric Garcetti joined young people from the Los Angeles LGBT Center on July 9 to call attention to the HIRE LA’s Youth program, which provides internships and summer jobs with the goal of linking youth with permanent employment and careers. 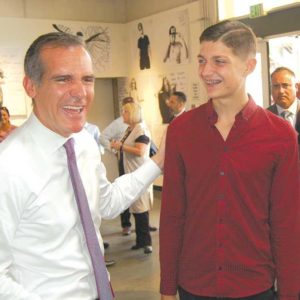 Mayor Eric Garcetti joined 19-year-old Travis Crown at the Los Angeles LGBT Center on July 9 to raise awareness about the HIRE LA’s Youth program. Crown, who was formerly homeless, secured an internship through the program that led to a permanent job. (photo by Edwin Folven)

“An open door to a job is life changing for any young person, especially those who’ve faced economic and social challenges,” Garcetti said. “HIRE LA’s Youth offers local teens and young adults the chance to earn a paycheck and meet industry leaders, which is an investment in both their lives and our city’s future.”

The HIRE LA’s Youth program launched in 2013, and last year matched 17,000 young Angelenos with summer jobs and internships. Garcetti announced a goal of linking 20,000 youth with jobs by 2020.

“Remember that feeling of getting your first paycheck? Putting that money in the bank that was yours. Being able to actually buy something for your parents and your siblings,” said Garcetti, who recalled his first summer job doing yardwork for neighbors in the Encino neighborhood where he grew up. “That was an amazing feeling because it showed you that you could be the determiner of your own dreams. And this same feeling can be true for every person in L.A. It is not too late to apply.”

Los Angeles LGBT Center CEO Lorri L. Jean said linking youth with jobs is important because it gives them a foundation for success, and perhaps most importantly, hope for the future.

“We all know that homelessness is at tragic proportions in our city. There are many children who are living on our streets, and the crisis is especially horrible for LGBT youth who comprise 40 percent of the homeless youth in Hollywood,” Jean said. “In the past year alone, our center has provided services to nearly 1,500 of these kids … and 59 percent of these youth report that what prevents them from securing stable housing is that they are unemployed. It’s not rocket science to understand their pathway to stability and independence is a stable job.”

Travis Crown, a 19 year old who spoke Monday during the press conference at the Los Angeles LGBT Center’s Village at Ed Gould Plaza, said finding employment was a “lifesaver.” Crown said last year, he was kicked out of his parents’ house because he was gay and ended up on the streets of Hollywood. The Los Angeles LGBT Center provided shelter and linked him with an internship through the center’s partnership with HIRE LA’s Youth. Crown worked with fellow LGBT youth in the center’s sexual health education program, which led to him securing a permanent position working with peers at the center. He starts next Monday.

“This internship experience made a huge impact in my life in many ways I did not foresee happening,” Crown said. “I completed my internship in March and since then, I have been able to achieve independent housing, and just a couple of weeks ago I accepted a permanent job right here at the center. I’ll be a peer advocate connecting youth with housing services in Hollywood and downtown L.A. It is because of the HIRE LA’s Youth program I feel confident in my ability to take on this new position.”

The program is for youth ages 14-24 and is open through the end of July. Interships generally last six weeks and are with companies in the entertainment, tech, transportation, health care, hospitality, government and financial services sectors. The program also offers training, mentoring and financial literacy coaching. Many of the positions are paid.