‘Hereditary’ is an unusual but satisfying horror film

Sometimes horror feels like the bravest genre out there. At least that’s the impression I get from “Hereditary,” a thrilling head-spinner both thought provoking and pulse pounding. It’s the kind of film best experienced with as little knowledge as possible, so be warned, no spoilers here. 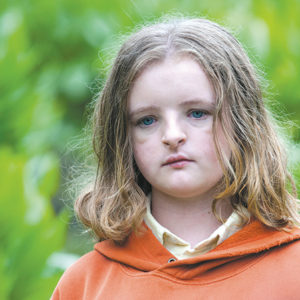 Milly Shapiro, as Charlie, is a standout in her big screen debut in “Hereditary.” (photo courtesy of A24)

The Graham family just lost a grandma. No real loss for daughter Annie (Toni Collette), who remained estranged from her for some time. But the death brought back Annie’s wretched childhood: a controlling mom, a brother who committed suicide and eventually forced separation from granny for the Grahams’ mental survival.

As a mother of two, Annie feels she let her family down because of her mother’s failures and how they influenced her own life (perhaps that’s where the title fits in). Youngest daughter Charlie (Milly Shapiro), the only one to develop a relationship with Annie’s mom, especially misses grandma, often feeling out of place among kids her own age. Meanwhile, older brother Peter (Alex Wolff) remains estranged from mom for reasons unclear. And somewhere in the background, dear old dad (Gabriel Byrne) tries to keep the family unit together.

Then another tragedy strikes, which sends the whole family spiraling. In particular, Annie can’t keep it together, and when things get weirder – perhaps supernatural, perhaps not – her tendency toward hysterics means the fam doesn’t buy her version of events. Everything leads to an explosive finale that pairs well with a shot of Grey Goose and a dumbfounded expression.

The first half of “Hereditary” is an emotional tornado wrecking every semblance of expectation. Don’t even bother guessing where the story will go; it wants to do it all, and it does just that quite effectively. As for the second half, things get bonkers. Frankly, I refuse to provide any details other than grandma dies, which sets off a series of crazy events for the Graham family.

Film studio A24 has a reputation for creating arthouse horror cinema (“The Witch,” “The Monster,” “The Green Room”), which I assume is a fancy way of diminishing the genre by saying something like “Hereditary” is horror for folks who don’t like horror. Stupid. “Hereditary” is horror, not some subgenre distanced from the label. That said, “Hereditary” doesn’t unfold in usual ways. At the start, it’s all mood, largely thanks to eerie sounds by Colin Stetson, composing in his most high-profile film to date. 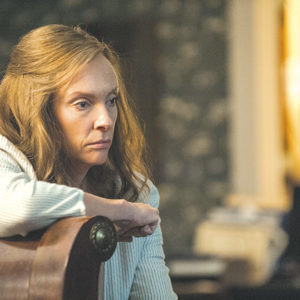 Toni Collette stars as Annie, who grapples with the effects of an unsettling childhood in “Hereditary.” (photo courtesy of A24)

And when things go down, that mood shifts to suffering and eventually straight-out suspense. Half the fun is trying to figure out what exactly is going on. The real pleasure lies in accepting how little you know all throughout the story.

I must commend first-time director-writer Ari Aster for creating one of the most well-crafted films this year. Clues are riddled all throughout in plain sight, but only multiple viewings illuminate them well. Filmmaking exists for cinema like this: complex, notes of ambiguity, occasional revulsion. Aster already has his next horror film lined up at A24, and I’m here for it all.

The major creep factor award goes to young Shapiro in her big-screen debut. This teen originated the role of Matilda in the Broadway musical, but her performance as social outcast Charlie is one of the best parts of the film, from the popping sound she makes with her mouth to the strange things that keep happening around her.

“Hereditary” isn’t the scariest film, but it’s disturbing in ways that linger long after. The ending is both brilliant and shocking, open ended and oddly final. Now, if only someone could please explain what that title means. This is “It Comes at Night” all over again (another A24 horror film).

Sip a taste of Sydney in DTLA at Paramount Coffee Project