“On Your Feet!” opened Tuesday night at The Hollywood Pantages Theatre and enticed the crowd to do just that with a rousing rendition of “Conga,” just one of the 26 smash hits  performed during the show. Based on the life of  Grammy winning superstar Gloria Estefan and her husband, Grammy winning producer-musician-entrepreneur Emilio Estefan, the Broadway musical chronicles the dynamic duo’s rise to stardom, first as Latino sensations, and then as the rare crossover band, Miami Sound Machine, to the American music scene. 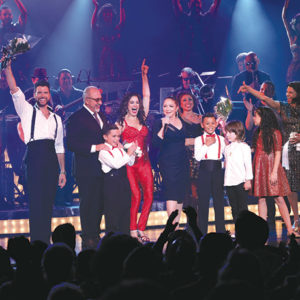 Gloria Estefan, center, takes center stage with Christie Prades, in red, and her husband Emilio Estefan, flanked by Mauricio Martinez on opening night at The Pantages. (photo by Chelsea Lauren)

The story begins as Gloria, beautifully performed by Cuban-American Broadway actress Christie Prades, finishes a concert in Washington D.C. with plans to board the band’s bus back to New York, the night of her fateful bus accident. Prior to boarding the bus, the story looks in the rear-view mirror at Gloria’s childhood and her musical start.

Her grandmother, Consuelo, played by Debra Cardona, encourages Gloria to pursue her singing career, much to the chagrin of her mother, Gloria Fajardo, played by Nancy Ticotin. The song “Anything for You,” or “No Te Olvidaré,” was written by Gloria for her grandmother, a fact I previously did not know. Hearing them again here brought tears to my eyes as Prades sang “And I’d do anything for you, I’ll give you up, If that’s what I should do, To make you happy.”

Emilio Estefan, artfully played by Mauricio Martinez, met Gloria when she was just 17. The two quickly formed a partnership that blossomed into a heart-warming love story.

When the band’s success grew among the Latin community, Emilio looked to expand into the American music market. He approached his producer who claimed that “nobody crosses over.” Martinez’s Emilio is quick to renounce that assertion and gets the biggest applause of the night. He stares down the producer and exclaims “Whether you know it or not, this is what an American looks like!” Did the writers at the time know how profound such a statement would become? Emilio defies the odds and the group becomes a multi-million dollar success, cranking out “Rhythm is Gonna Get You,” “Live for Loving You,” “Turn the Beat Around” and many more.

As Gloria Estefan and the Miami Sound Machine tour the world from Berlin to Paris to Madrid, the lead singer grows weary and tells her beloved Emilio she needs a break, all leading to the fateful bus accident on a snowy night leaving Gloria with steel rods permanently implanted in her back. The road to recovery was long, yet the tenacious Estefan, with encouragement from her family and fans, climbs back on top.

A fast tempo choreography by Sergio Trujillo and sharp direction by Jerry Mitchell lead an ensemble cast who entertains and portrays a compelling story with outstanding costumes yet somewhat minimalist set design.

Opening night was a smash sensation with Gloria and Emilio Estefan sitting in the audience. They took the stage at the end of the performance with their grandson Sasha who danced his way off the stage.

‘Ant-Man and the Wasp’ keeps the heroics light