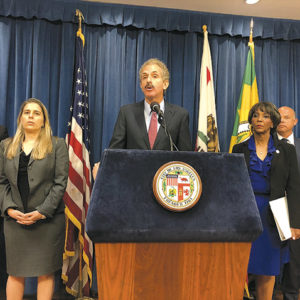 The settlement establishes new protocols for discharging homeless patients and directs the facility to spend $550,000 to fund a new Homeless Patient Assistance Program. Additionally, Feuer and Lacey announced they will co-host the “Summit On Humanely Discharging Homeless Patients” later this summer. The summit will bring staff from Southern California medical facilities together with health, social services and law enforcement experts to determine ways to address the challenges associated with the discharge of homeless patients.

“Patient dumping is an outrage and should never happen again to anyone. As Los Angeles struggles with its homeless crisis, my office will continue to confront any facility that leaves a vulnerable patient to fend for him or herself,” Feuer said. “But it’s even more important to prevent the problem from occurring in the first place. That’s why we’re announcing a summit to bring healthcare facilities, service providers, law enforcement and other experts together to better understand and address the challenges which often lead to the unlawful discharge of homeless patients.”

The city attorney’s office initiated an investigation into Silver Lake after a whistleblower provided information of an alleged practice of homeless patient dumping with numerous alleged victims. The medical center was cooperative during the investigation and ensuing settlement process.

“The hospital’s blatant disregard for the law and its patients’ well-being cannot be ignored or go unpunished,” Lacey said. “Our homeless community deserves to be treated with the same humanity, dignity and respect that any of us would expect, especially from those tasked with our care and protection.”

The city attorney and the district attorney have entered into a settlement they said will prohibit patient dumping, provide protections for patients who are discharged and provide funding to assist in housing homeless psychiatric patients who are released from the facility. The settlement also ensures that Silver Lake Medical Center remains as an important part of the much-needed inpatient psychiatric network in Southern California. As a full service psychiatric facility with 118 beds, Silver Lake Medical Center provides critical services to patients. The settlement will protect patients who seek treatment at its facilities in Rosemead and Echo Park, and provide them with access to social services and housing.

The settlement includes an injunction and requires Silver Lake Medical Center to begin implementation of its new “Special Populations Discharge Planning Protocol,” as well as to establish a training program for all hospital staff involved in discharge planning. The medical center must provide discharged patients with the best possible housing options to meet their needs, confirm the availability of recommended housing options prior to discharge, ensure that each homeless patient is offered appropriate transportation and release, determine if a patient is eligible for housing or other social services and assist patients in identifying and applying for those benefits, and provide information about how patients can access psychiatric and other medical and social services after discharge.

The city attorney’s office maintains a patient dumping hotline and encourages anyone with information to call (213)978-8340.

Man charged with rape for April attack in Beverly Hills