Cuisine worthy of the king of Thailand

Operating on Fairfax Avenue since the mid-1970s, Thai restaurant Chao Krung has become an integral part of the Los Angeles community. Originally led by Boon and Supa Kuntee, the restaurant is now run by their daughters, Amanda Kuntee and Katy Noochlaor, who are serving up some delicious new surprises. 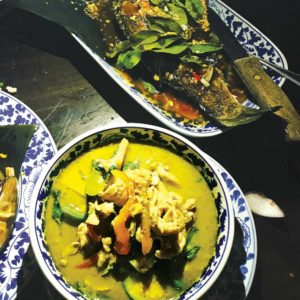 Garlicky whole fish and spicy green curry are among some of the best dishes at Chao Krung. (photo by Jill Weinlein)

The restaurant recently underwent an interior makeover, but the family and its history remain the focus. The sisters pay homage to their Thai roots, displaying beautiful hand-carved Thai antiques and artwork alongside family photos hung on the wood paneling. The interior wasn’t the only thing that received a makeover, however – the menu did as well.

“Through the years, the dishes became more Americanized and not as authentic as we remembered and loved,” Kuntee, the restaurant’s executive chef, said while handing us the menus. She now prepares many of the family’s traditional recipes, including, as we learned, the dishes the king of Thailand enjoyed. The sisters’ grandmother cooked for the king using the highest quality ingredients, meats and sauces made from scratch – and now Kuntee is doing the same for Angelenos.

One of those dishes worthy of a king is the Sister A’s homemade Thai sour sausage. It arrived on a pretty black-and-white-striped plate with five small brown sausages served with a lime wedge, fresh ginger, red onion and cabbage leaves. Wrapping a sausage around a cabbage leaf, I squeezed lime juice on top, and added some ginger and red onion. It was sublime – the flavorful moist pork sausage has the essence of lemongrass, garlic, sticky rice, coriander root and white pepper. Kuntee makes all of the sauces, including the bird’s eye chili sauce for the sour sausages.

A nice cold draft beer completes this dish. The beer and wine list curated by Last Word Hospitality offers a handful of red wines from California and France, while white wines include a sparkling M. Bonnamy Crémant de Loire and pinot gris from Dundee Hills in Oregon.

I enjoyed a refreshing glass of grenache-syrah rosé to pair with the iconic Thai street food snack – tod mun pla, or fish cakes. They were served with a bowl of chopped cucumbers and peanuts, adding texture and crunch to the sweetness of the curry fish sauce.

A favorite around the table was the pyramid of pad thai rice noodles that arrived on a plate with stir-fried shrimp and a tamarind fish sauce. A little palm sugar sweetened the noodles, and preserved radish slices balanced out the pleasing flavors. Bean sprouts, one-inch long green onion stalks, a lime wedge and a mound of crushed peanuts came on the side, perfect for adding in more texture and kick.

We also enjoyed sharing the yum woon sen sweet and spicy glass noodle salad with layers of ground pork, slices of Chinese celery, pickled garlic, Thai chilies and shallots. A drizzle of fish sauce and garlic chili dressing accentuated all of the fresh Thai flavors. This can be ordered vegetarian style too.

For those looking for some heat, the bowl of green curry with chicken does the job with green Thai chilis and jalapeños. We ladled this dish over perfectly cooked jasmine rice. 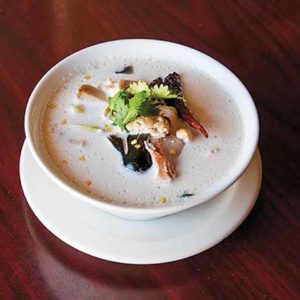 My bowl of tom kha gai soup with chicken, mushrooms and ginger featured slices of lemongrass cooked until soft. Biting into a stalk offered a pleasing coolness to balance out the heat of the coconut broth and the flavors of the fresh cilantro on top.

We used chopsticks for most of the dishes, however we did need to use a knife to fillet a whole fish that was deep fried with garlic. Known as pad gra tiem, this fish was crispy on the outside, and moist and flakey on the inside.

To wrap up the meal, diners can choose desserts such as the freshly sliced mango with coconut sticky rice, or the coconut ice cream topped with praline mixed nuts and fresh green mint.

Forty years after its founding, Chao Krung hasn’t lost its spark. And now, this Thai restaurant is bringing a family legacy to a new generation of diners in Los Angeles.

‘Sinatra and Me’ returns to Catalina Jazz Club