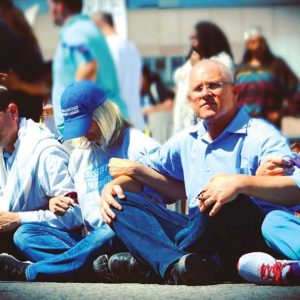 Councilman Mike Bonin was arrested by LAPD and detained for two hours after blocking an entrace to an ICE facility in downtown L.A. on July 2. (photo courtesy of the 11th Council District office)

Bonin, 11th District, and a group of parents, immigrants and community leaders blocked the entrances to the U.S. Immigration and Customs Enforcement office in downtown L.A. to protest the policy, which has resulted in more than 2,300 children being separated from their families after crossing the border. Police reportedly told them they were gathered in an unlawful assembly before making arrests.

“When the government rips kids from their parents’ arms, opens baby jails and throws families seeking asylum into internment camps, our common humanity is at risk,” Bonin said in a statement following his approximately two-hour detainment by LAPD. “How does a parent not risk arrest?”

The president signed an executive order to keep families together in detention as they go through the legal process, but it’s unclear how quickly the families that have already been separated will be reunited. The Department of Homeland Security said in a news release that it has already begun that process.

“What’s happening is not normal,” Bonin continued. “It is sick and evil, and treating it like a mere policy disagreement is absurd and complicit. For our kids, for our country, and for our humanity, we need to roar and to resist – with our voices and with our bodies. It is an urgent act of love, and a necessary act of patriotism.”

On Monday, Los Angeles Mayor Eric Garcetti and West Hollywood Mayor John Duran were among 130 mayors to issue an open letter to the Trump administration calling for the immediate reunification of children.

“As mayors, we see firsthand, every day, the positive impact that immigrants have on our communities,” the letter said. “They contribute in countless ways to our economic and cultural strength. But we also see the impact that our nation’s broken immigration system – and the policies stemming from it – are having on our cities. This broken system creates fear and uncertainty, which has a detrimental effect on the safety, health and wellbeing of our residents.”

Bonin organized a rally attended by hundreds of protesters the week prior in Westwood, where local leaders including L.A. City Councilman Paul Koretz, 5th District, and LAUSD school board Vice President Nick Melvoin spoke against the new Trump policy.

Last month, before Trump’s executive order, Bonin and six other City Council members put forward a resolution for the city attorney to file an amicus brief or other document in support of the Ms. L v. U.S. Immigration and Customs Enforcement, filed by the American Civil Liberties Union, which aimed to prevent families from being separated.

The council resolution cited a report of 177 women who were taken into custody at the U.S. border and were being held at Seattle’s SeaTac Federal Detention Center. About half of them were separated from their children, in some cases without realizing the separation was indefinite.

“These children could be heard screaming and asking for their mothers just one room away, while the mothers were denied the ability to see or hold their children,” the council’s resolution stated. “This practice is absolutely sickening and the city of Los Angeles must take the strongest possible position against this new policy.”

Koretz has been comparing the policy to World War II, when Japanese-Americans were kept in internment camps in the U.S., and the Holocaust.

“One word,” Koretz said of his reaction to the policy ahead of Bonin’s Westwood protest. “Disgust. When we remember the Holocaust we say, ‘Never Again.’ We remember it so that we learn from the horrific atrocities that humanity is capable of. Not since World War II did I ever think that on this soil we would be witnessing children ripped from their parents, babies torn from their mother’s breast. What kind of nation are we if we stand by while refugee families are arriving here – fleeing inhumanity for a chance at the American dream and children are separated and forced to sleep in cages? Refugees are not criminals. Children are not animals.”