It’s a marriage of two American icons – baseball and hot dogs – and the National Hot Dog and Sausage Council estimates that baseball fans will consume more than 19 million hot dogs and 4.6 million sausages during the 2018 Major League Baseball season. 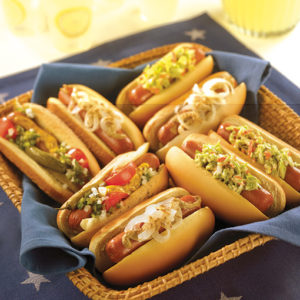 photo courtesy of the National Hot Dog and Sausage Council

The Los Angeles Dodgers may have fallen just short of winning last year’s World Series, but the team can relish in another important victory: fans are once again projected to consume the most hot dogs, totaling more than three million.  That is enough to round the bases at Dodger Stadium 5,952 times, and nearly 80 percent of fans at Dodger home games will eat a hot dog.

So whether you enjoy a hot dog at home from your own grill or at Dodger Stadium, relish the fact that Los Angeles loves hot dogs!