Approximately 1,500 people were evacuated from the Greek Theatre on July 15 after an individual who claimed he was in the audience threatened to detonate pipe bombs. 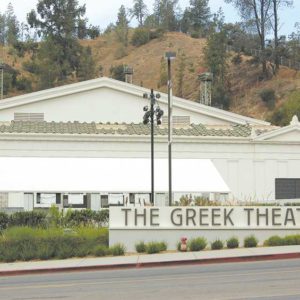 The Greek Theatre was evacuated during a performance on July 15 because of a bomb threat. (photo by Edwin Folven)

The threat was made at approximately 6:15 p.m. in a call to the theater as audiences gathered in the Griffith Park venue for a free concert by YouTube star Fousey. It was unclear who fielded the call. The Los Angeles Police Department was notified and officers closed the theater and evacuated concert-goers. The LAPD’s Bomb Squad searched the venue, which took several hours. No explosives were found. The concert was cancelled.

The artist, whose real name is Yousef Saleh Erakat, addressed a crowd in the parking lot during an impromptu performance for fans who remained. He posted a statement about the threat on Twitter.

“Everything was going according to plan. I was on the way then … a bomb threat was called in,” he said. “Love will prevail. And I believe in my message and have people around me who do as well. Hate is strong, yes. Hate is evil. Yes. But hate is not stronger than love.”

Fousey’s performance was titled “Hate Died, Love Arrived.” He told followers on Twitter that he plans to return soon for a larger concert, perhaps at Staples Center.

LAPD spokesman Drake Madison said the bomb threat is under investigation. The threat at the Greek Theatre was considered “swatting,” which are hoaxes in which threats are made so police respond to locations with significant resources.

“We did not locate any devices,” Madison said. “People do dumb stuff like that. It’s unfortunate.”

The Los Angeles Department of Recreation and Parks, which operates the Greek Theatre, confirmed in a statement that no explosive devices were found on the property.

“Security and safety of our guests remains our highest priority,” the statement read.

No explosives were found, and the observatory reopened before the end of the day. The Griffith Observatory had been closed from July 10-13 because of a brush fire that ignited on a nearby hillside. Madison said the bomb threats at the observatory and the Greek Theatre are not believed to be related.

“I was in contact with Los Angeles Police Department and the Department of Recreation and Parks during these threats made to the Greek Theatre and Griffith Observatory,” Ryu said in a statement. “I’m so thankful to these departments for moving quickly and professionally to ensure everyone was safe. Increased security measures are a part of the capital improvements plan at the Greek Theatre, but this problem of ‘swatting’ is a national issue that needs to be addressed.”