During a Coffee with the Cops event in Beverly Hills last week, Mayor Julian Gold said a high school-aged girl rode by on an electric scooter. Police stopped her to tell her she needed to wear a helmet. An older woman approached them and said the girl almost hit her. 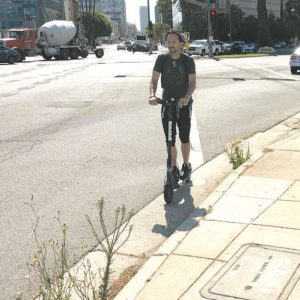 The ban will last up to six months as the city works with the scooter companies on regulations and safety measures. (photo by Luke Harold)

“I’m sure that’s a scenario that happens more than once every day,” Gold said on July 24, when the Beverly Hills City Council voted 4-1 for an up to six-month ban of the scooters that companies Lime and Bird have made popular throughout the county.

Council members want to work with the scooter companies and city personnel in that time to alleviate the safety concerns. The scooters travel up to 15 mph and are often ridden on sidewalks, despite advisories from the scooter companies to stay on the street. Few riders wear helmets, even though Bird and Lime offer them for free.

Under the ban, riders in Beverly Hills can be penalized for riding or leaving scooters in public rights of way. The amounts of the citations they could receive are still being determined, city spokesman Keith Sterling said. Scooter companies are prohibited from offering them anywhere in Beverly Hills. The city will fine the companies $121 for removing a scooter and $51 per day for storage.

Given their ubiquity, one resident who opposed the ban said enforcement would be a “never-ending game of whack-a-mole” for Beverly Hills police. Councilman John Mirisch, the lone vote against it, said “an outright ban is unrealistic.”

“A ban in this form won’t really solve anything,” he added.

“At this point, it’s very challenging for the police staff on the safety side,” Beverly Hills police Chief Sandra Spagnoli told the council before its vote.

She added that Beverly Hills doesn’t have a street layout like the city of Santa Monica, which is better equipped to accommodate the scooters.

“We want to make sure that [infrastructure] is in place before we say that this is safe in our city,” Spagnoli said.

The Santa Monica City Council voted last month to start a 16-month pilot program that allows for continued usage of electric scooters. Culver City has agreed to allow Bird and Lime to operate within the city for a six-month trial period as the city collects data and feedback for a long-term plan. The Los Angeles City Council is also working on regulations for electric scooter companies. The West Hollywood City Council also instituted a ban that penalizes scooter companies for scooters left in West Hollywood, but doesn’t prohibit riders from using them within the city. The companies could face an impound fee of $40, West Hollywood Deputy City Manager Oscar Delgado said last month.

“If we can find a way to make this safe for everybody, I’d be happy to do it,” Councilwoman Lili Bosse said, citing helmet usage as one of her biggest concerns.

Beverly Hills residents were divided over whether to allow electric scooters. Some said they make traveling short distances more convenient, while others, such as Julie Gilberg, reiterated concerns about the city’s lack of infrastructure to support them.

“I see drivers trying to avoid hitting them because they’re weaving in and out,” Gilberg said.

Lime’s director of strategic development, Sam Dreiman, said in a statement that “Beverly Hills has a history of embracing innovation.”

“[Tuesday] night, the city broke from this tradition by slowing down the adoption of innovative mobility solutions that would lead to fewer cars on the road, less traffic congestion, and improved air quality,” Dreiman said. “We hope to work with the city to roll out a scooter share program that prioritizes safety and responsible rider behavior, while providing residents and riders with clean and affordable alternatives to cars.”

The company issued a similar statement last month when West Hollywood voted to institute its ban, saying it wants to work the city to address safety and other concerns.

Bird released a statement saying it would also like to continue working with the city of Beverly Hills.

“We remain committed to our goal of getting people out of their cars to curb traffic and cut carbon emissions in the community of Beverly Hills,” the statement said.

A company spokesperson was unable to provide a comment about the West Hollywood ban before press time.

Tents come down on Poinsettia Place