City Attorney Mike Feuer was among the lineup of leaders from throughout the county to urge the local community to work with his office, police and sheriff’s officials to end gun violence at a rally in South L.A. on July 13, hosted by state Assemblyman Mike Gipson (D-Carson).

“God has a plan,” Feuer said. “Gun violence is not part of that plan. No mother should lose her son to gun violence because of the color of his shoes.”

Tevin Price, 19, was killed by a gunman in front of his mother earlier this year outside a South L.A. market after refusing to give up his red shoes. 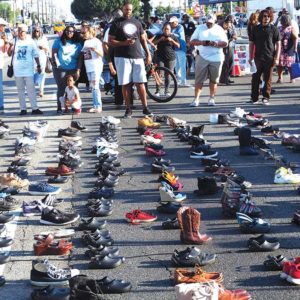 Local residents brought shoes and placed them in the street near the intersection of Vermont and Manchester avenues to represent victims of gun violence. (photo by Luke Harold)

“No father should forbid his kids to sleep in beds because beds are above windowsill level, and bullets fly past windowsills,” Feuer continued. “And no teenage girl should have to use the body of one of her classmates who just got shot to death to shield her from a gunman who was intent on shooting her classmates, but that happened in our country.”

Local residents in attendance left pairs of shoes at the intersection of Vermont and Manchester avenues to represent their friends and family members who were killed by guns.