Zombie film ‘Cargo’ taps into all the feels

My twin boys are 10 months old next week, so I should know better than to watch a film like “Cargo,” a zombie story about one father’s final act to protect his daughter before infection changes him into something that sees her as other than precious. And Martin Freeman is the father. This has all the feels, plaguing every newly forming, vulnerable fatherly instinct I never thought possible. 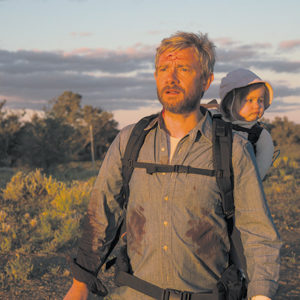 Martin Freeman as Andy is the heartbeat of the story in “Cargo.” (photo courtesy of Netflix)

The ugly crying, that’s not the kiddos waking from a nap. That’s me. What have I done.

In a zombie-infested Australia, Andy (Freeman) and Kay (Susie Porter) enjoy the safety of a house boat as they plan their next move. Rations are low, and young Rosie (Marlin Jane McPherson-Dobbins) needs more lest she starve. Cue the feels, realizing that as a parent you’re in charge of keeping someone alive.

The parents bicker – the stress of childrearing in such conditions can mount – but they love each other till the end. That happens. Mom gets bit, and a slow bid farewell commences. Then dad, unwilling to perform the one task every “Walking Dead” survivor knows well, is soon to follow when mom turns on him. But what about Rosie? Andy has 48 hours before infection completely sets in; 48 hours to find a safe place for his only child before the long goodbye becomes permanent.

Along the way, Andy meets many candidates, none of which are what Rosie needs to live as more than just a burden in a broken society. So, he must run down the clock, giving all that remains of his body, for his little girl. The most emotional moments occur when Andy slips a little further away, succumbing to a change in appetite. But he tries to pull back, knowing Rosie doesn’t have a chance yet.

I suppose this is a horror film, but directors Ben Howling and Yolanda Ramke, adapting their 2013 short film of the same name aren’t interested in jolts or gore. Just when the intensity seems to begin, the camera cuts away, jumps ahead or places it in a blurred background, focusing instead on another character’s response to the trauma, not the trauma itself. It’s a gamble considering most zombie fans prefer a visceral experience. They have plenty of other options out there; this one’s for the thespians who bask in a subgenre’s ability to evolve, be more than one type of film. 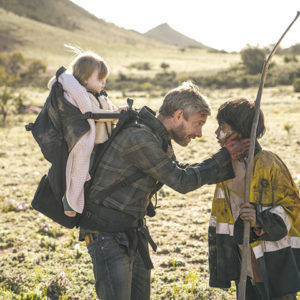 This a slow journey through the frailty of life and the importance of parenting – we meet some bad seeds along the way. Stylistically, “Cargo” is like “The Road” and 2010’s “Monsters,” both wonderful genre films that make do without enormous set pieces or large casts. Filmmaking on a budget, certainly, but no less powerful or moving.

Freeman is the heartbeat of this story (at least while it still beats), and he accepts the challenge with his usual charm, stoically keeping things together for a daughter who might never know him. “Cargo” even takes an interesting turn when Andy encounters Thoomi (Simone Landers), becoming a nurturing father figure in place of the one she lost. Freeman’s Andy is my father-figure hero.

Little Marlin Jane McPherson-Dobbins, as Rosie, is too young to be acting, but the directing duo sure know how to employ the right baby cry at the right moment. Even more incredible when she does something cute, especially during the climactic conclusion.

And that ending is killer, hitting the feels like a wrecking ball. This is rough stuff. Don’t look it up and spoil the journey. Just grab a few rolls of Costco tissue paper, a bucket of Häagen-Dazs and prepare for a zombie film that might as well end with the phrase, “Do your parents know you love them?”

“Cargo” is the kind of film seen once, enjoyed and appreciated. No awards or grand honors coming its way, but a wonderful piece of original cinema that makes me appreciate the time with my kids a little more. It’s all about the feels.