The Japan Foundation, Los Angeles, in collaboration with the Los Angeles County Museum of Art, presents the exhibition “Impressions of the Seas: Gyotaku Fish Prints” by Dwight Hwang. 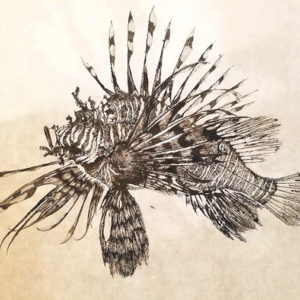 Japanese gyotaku, which translates to “fish rubbing,” is the unlikely marriage of fish, sumi ink and washi paper. Once used to record the size of an impressive catch, it has been elevated to a fine art through the efforts of gyotaku masters such as Yutaka Aso and Yoshio Hiyama, and was introduced to the United States in the mid-20th century.

Contemporary practitioners have supplanted the traditional method with modern acrylics and oil-based inks, as well as the inclusion of pigmentation by colored inks or through digital editing.

Hwang is a Los Angeles-based, Korean-American storyboard artist who trained in gyotaku during a seven-year stint in Japan. A self-taught traditionalist in that he almost exclusively creates black-and-white images with water-based sumi, Hwang brings life to lifeless forms through his approach which has produced unique depictions of fish at a three-quarter view and from above.

Admission is free. The Japan Foundation is located at 5700 Wilshire Blvd., Ste. 100. For information, visit jflalc.org.

Free and low-cost events held at the Ford Theatres