Residents of the Melrose district are concerned about vacant houses that many claim are becoming magnets for homeless individuals who illegally go inside and engage in criminal activity. 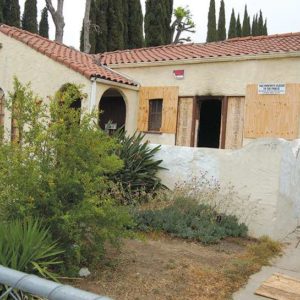 A fire erupted in a vacant house at 836 N. Poinsettia Place on June 6. Neighbors claim the building attracts transients who break in and engage in illegal activity. (photo by Edwin Folven)

One such house at 836 N. Poinsettia Place that has been vacant for months has become a focal point for neighborhood frustrations. A fire erupted in the residence at approximately 1:40 a.m. on June 6 and some neighbors believe it was caused by transients. Los Angeles Fire Department spokeswoman Margaret Stewart said the fire is under investigation and the cause has not been determined. The blaze has sparked new concerns about the property and renewed calls for action.

“The neighbors think it’s arson,” said Peter Nichols, founder of the Melrose Action Neighborhood Watch. “An anonymous neighbor says she saw a group of transients running out of there.”

Nichols said transients trespassing in vacant houses has long been a problem, but it is becoming more of a concern recently as developers purchase houses with the intention of tearing them down and rebuilding, but the homes remain vacant or boarded up during the planning and permitting process. The burned residence was fenced, had windows boarded up and no trespassing signs posted, but that has done little to prevent people from going inside, Nichols said.

Senior Lead Officer Inga Wecker, of the LAPD’s Wilshire Division, said she is aware of the property and the problems associated with it, and frequently stops by to look for trespassers. Wecker said she knows of eight to 10 similar vacant houses in the Melrose district. Police arrest or cite people when they find them inside, but trespassing is a misdemeanor and officers have few tools to create a long-term solution.

Wecker said the scope of what police can do is limited. Because the houses are vacant and there is no furniture or belongings inside, under the law, individuals who break-in cannot be arrested for burglary, which is a felony that would result in them going to jail for an extended period of time. The only other option when officers find someone inside is to issue a citation for misdemeanor trespassing and to warn the individual not to return.

Under the law, officers must witness someone inside to cite them for a misdemeanor. If someone calls police and the individual has already left the premises by the time officers arrive, police can only take the individual into custody or issue a citation if the person who called police makes a citizen’s arrest. Most people decline to do that, she added.

Wecker said issuing a citation is an important first step, however, because if an individual fails to appear in court, a warrant is issued and the next time officers encounter them, an arrest can be made. But sometimes that is also problematic, because misdemeanor trespassing is considered such a minor crime that the individuals are generally released from jail shortly after being booked.

“I go by these problem locations and arrest them so they get the idea we are not messing around,” Wecker said. “But word of mouth gets around quickly and more people typically show up. It’s so frustrating.”

Police must also have the owner’s authorization to cite someone for entering a vacant building, which means property owners must file a trespass arrest authorization form with the police department. Vacant buildings must also be secured and boarded up with no trespassing signs installed, which provides a warning to people who are planning to go inside.

If the owner fails to comply with securing the residence, then the Los Angeles Department of Building and Safety is the enforcement agency, and fines and penalties can be levied against a property owner. The property on Poinsettia Place was secured, so it is unclear whether the owner could be held responsible.

Nichols said he is working with Wecker and the Los Angeles City Attorney’s Office to address issues involving homeless individuals in the neighborhood. He said the neighborhood watch is creating a list of vacant properties in the Melrose district to determine the extent of the problem and where to request more police resources.

Wecker added that transients breaking into vacant houses is a continual problem and police take the issue very seriously. She said some homeless individuals who break into vacant houses may be coming from an encampment on Poinsettia Place north of Willoughby Avenue, but each situation is different. The city is currently working to alleviate issues created by the encampment and has directed more outreach teams to the site. Police have been stopping by the encampment daily to monitor activity and the Los Angeles Bureau of Sanitation is planning another cleanup at the encampment today.

Nichols said there is an obvious connection between the encampment and the issues in the surrounding neighborhood. In addition to trespassing, concerns include thefts, drug usage, urinating and defecating in public, lewd behavior and prostitution.

“There is so much hyper-focus on this encampment but these [vacant houses] are like mini-encampments,” Nichols said. “We are incredibly frustrated; it goes on and on and on. People are really afraid.”

Councilman Paul Koretz is also taking steps to address the issues in the Melrose district. He sent a letter regarding his position dated June 7 to community members and others involved the effort to solve the problems.

“The situation around Poinsettia Park, specifically transients engaging in and displaying criminal behavior, has reached a critical level. I am advocating for our public safety agencies to bring every resource to bear to solve the crisis around the Poinsettia Park neighborhood. Additionally, I am calling on the LAPD to do whatever is in their power to remove the criminal element from the area,” the letter read in part. “I am advocating a zero tolerance approach to all criminal behavior, especially in areas near sensitive uses (e.g. parks, schools), critical infrastructure sites including those owned by LADWP, and the high fire severity zones in our hillsides. With regard to the Poinsettia Park area, the incidents of criminal engagement and behavior being reported are not minor in nature, and I have therefore requested that the Los Angeles Police Department react swiftly and expeditiously to continue to maintain law and order. There are already laws on the books which address many of the issues plaguing the area around Poinsettia Park, including laws that address trespassing. For this reason and many others, I am also asking that the city attorney take a more proactive approach to enforcement by filing against individuals who are committing criminal offenses and endangering our neighborhoods.”

This is the direct result of AB 109, prop 47 and prop 57 dumping criminals out of jail and onto the streets.

And even if they do manage to get arrested for something more serious such as battery, which is becoming more and more common, they know they’ll be released early from jail and back out on the streets in a matter of days.

We’re watching the breakdown of basic law and order in real time as our city and state go down the drain.