The American Theatre Organ Society, in conjunction with its annual convention of organ enthusiasts from around the world, will present an organ recital by Brett Valliant playing the Wilshire Boulevard Temple Kimball organ on Sunday, July 1, from 3:15 to 6 p.m. 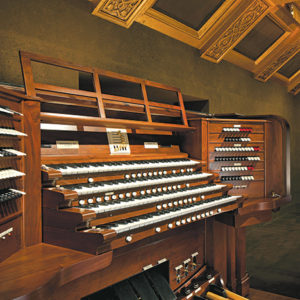 The 4,102-pipe organ is considered to be one of the best examples produced by the Kimball Company. It was installed in 1929 and refurbished in 2013, thanks to the generosity of Ambassador Lester Korn and Carolbeth Korn. The recital will be a rare opportunity to hear the organ played outside of a religious service.

Valliant is an American organist who performs many genres of music. Whether performing on an organ in a concert hall, a church organ, a Wurlitzer or a Hammond B-3, Valliant’s performances have been described as exciting and refreshing.

The American Theatre Organ Society is an international society dedicated to the preservation, restoration and promotion of the theater pipe organ. The concert will be held at Wilshire Boulevard Temple, 3663 Wilshire Blvd. Admission is free, but RSVP by visiting eventbrite.com/e/brett-valliant-in-recital-on-wilshire-boulevard-temple-kimball-organ-tickets-47360819486.

Free and low-cost events held at the Ford Theatres