The school year may be wrapping up, but a handful of students, teachers and parents still turned out to rally on June 12 at the Los Angeles Unified School District’s downtown headquarters for a resolution intended to increase support for LGBTQ students. 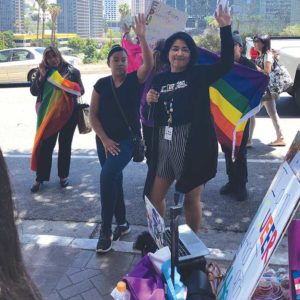 LAUSD students and members of the LA LGBT Center, Latino Equality Alliance, GSA Network and ONE Archives gathered to support the Board of Education’s resolution to create more inclusive school environments for LGBTQ students. (photo courtesy of Krystal Torres-Covarrubias)

The resolution, “Increasing Supports for LGBTQ+ Students, Their Families and Schools,” was authored by board member Ref Rodriguez and passed unanimously Tuesday.

The resolution calls on LAUSD to recognize October as LGBTQ History Month; increase competency training for educators, staff and parents; share LGBTQ resources and information on the district’s website; and conduct an analysis of single-user, all-gender bathrooms at schools. It additionally mandates a high school textbook committee to work with the Division of Instruction and to include students in the process of choosing appropriate and inclusive textbooks, particularly for history and social science courses.

Rodriguez developed the resolution following a conversation with the Latino Equality Alliance’s LGBTQA Youth Council. According to the 2017 Youth Risk Behavior Survey, 7.2 percent of high school students in LAUSD identify as lesbian, gay or bisexual, 1 percent as transgender, 4.5 percent as questioning and 3.7 percent as gender nonconforming.

“We’re fortunate in L.A. to have a lot of gay-straight alliances, but we don’t want to take that for granted,” said Jacob Roberts, communications director for Rodriguez. “It is difficult to educate the whole child when a child feels that a part of their identity is looked down upon.”

Krystal Torres-Covarrubias, education policy manager at the Los Angeles LGBT Center said the resolution pushes the district to get up to speed with state law, such as the Fair, Accurate, Inclusive and Respectful Education Act, which calls for the inclusion of LGBTQ people and people with disabilities in history and social studies classes in California’s public schools.

Similarly, California enacted the Equal Restroom Access Act in 2016, which requires single-user restrooms to be gender neutral. According to the resolution, 93 percent of LAUSD’s facilities are complying with the policy, but as Torres-Covarrubias said, even if a school has a gender-neutral, single-user restroom, “students don’t always know where it’s at, how to use it.”

“We want to make sure that information is widely available,” she added.

More than 20 supporters showed up to the rally led by the LA LGBT Center, Latino Equality Alliance, GSA Network and ONE Archives. The group held up rainbow flags and signs declaring “El amor es amor” and “I am queer and I am here.” For many of the students present, it was their second to last day of school. Other participants, like Esperanza Ruiz, had just graduated like she had from Woodrow Wilson High School east of Los Angeles last week.

“All history – the good and the bad – has to be included,” Ruiz said. She recalled when a history teacher dismissed her questions about the lack of LGBT history being taught.

“He told me, ‘You can look it up on your own time,’” Ruiz said, adding that the incident spurred her to more actively look for LGBT history and support the community. “We need, as people, to be organized together to really create a movement. This rally and resolution is one possible way to create change.”

When the time came for the board to discuss the resolution, the rally participants filed into the meeting. Torres-Covarrubias addressed the Board of Education, as well as two parents, one teacher and four students who all shared personal accounts of dealing with school policies that did not properly acknowledge LGBT students and their concerns.

Axel Ortega, a transgender student at Garfield High School, recounted that when a teacher refused to call him by his preferred name, he wanted to “break down and run out” because he was so upset and ashamed. And despite policies such as the FAIR Education Act, Emily Grijalva, a teacher at Felicitas and Gonzalo Mendez High School, said, “Not once have we been encouraged to include LGBT writers or history in our curriculum.”

“The bullying is a consequence of a lack of education,” Axel Tirado, a student from Mendez High School, said. “Learning queer history validates you.”

The board members thanked the speakers, in particular the students, for sharing their stories.

“You are changing the world,” board Vice President Nick Melvoin said. “We need you to graduate, go to college and run for office.”