The Los Angeles City Council on June 27 approved a motion by Councilman Mitch O’Farrell that will enable the city to study ways to improve the Hollywood Walk of Fame. 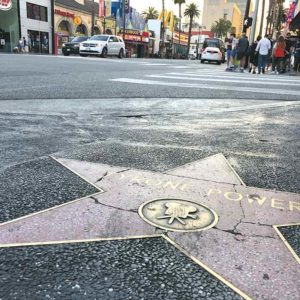 Some stars on the Hollywood Walk of Fame are cracked and need repairs. The Los Angeles City Council on June 27 approved funding for a plan to study possible improvements that could include repairs along the sidewalks adjacent to Hollywood Boulevard. (photo by Luke Harold)

The motion calls for a little more than $3.5 million in former community redevelopment funds to be used for such a study, and possibly initial improvements. The funds came from bond money the state returned to the city after Gov. Jerry Brown dissolved local community development agencies in 2011. O’Farrell wants to use the previously undesignated funds to help create a master plan for Hollywood Boulevard that will include ways the Walk of Fame could be enhanced.

The first stars on the Walk of Fame were unveiled in 1958. Six decades later, some areas of the attraction are cracked and damaged.

“I think it’s a wonderful surprise,” said Leron Gubler, president and CEO of the Hollywood Chamber of Commerce. “We weren’t anticipating this. For Councilman O’Farrell to help with the preservation of the Walk of Fame is wonderful.”

Gubler said the Hollywood Historic Trust continuously makes repairs to the Walk of Fame – including emergency repairs when stars are badly damaged – but it is difficult to expeditiously address all areas needing work. The cost for a star on the Walk of Fame is $40,000 – paid by the recipient – with $15,000 going toward the cost of the unveiling ceremony and $25,000 being used for repairs and other maintenance and costs for the attraction, he added.

The city also funds projects to repair the sidewalks and adjacent streets. The Walk of Fame stretches approximately 15 blocks along Hollywood Boulevard and Vine Street. On June 14, actor Jeff Goldblum received the 2,638th star, the most recent one unveiled.

Gubler stressed that specific improvement projects resulting from O’Farrell’s recent motion have not been identified. Some ideas he mentioned were the removal of trees with roots that buckle the sidewalks along the Walk of Fame, and creating guidelines and processes for developers to make repairs more quickly if the stars or the terrazzo surface of the walk is damaged.

O’Farrell’s chief of staff Jeanne Min said the councilman would like to see more block-by-block uniformity in curbs, sidewalks and street fixtures along the boulevard with new amenities that could enhance the pedestrian experience. Another thought is to look at whether there are materials similar to terrazzo that could be used that would be more resistant to damage.

Min said the next step is for the motion to be vetted by the city’s Economic Development Department. The staff will produce a report that will then be considered by the city’s Bond Oversight Committee before returning to the City Council for a second hearing. The process, which will likely take months, is necessary because it involves public bond funding. The council’s approval on June 27 is the first step in a long process, but gets the process moving forward.

“The iconic Hollywood Walk of Fame has been a destination for generations of visitors to Los Angeles. The number of stars has expanded throughout Hollywood Boulevard into the world-famous attraction we now know today,” O’Farrell said. “However, this beloved thoroughfare is in need of a facelift, and I am pleased to dedicate funds to make improvements to the Walk of Fame so future generations can enjoy this national historic landmark.”