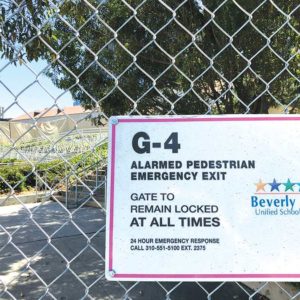 The Beverly Hills Unified School District’s Board of Education has been taking steps to improve school security at its five campuses. (photo by Luke Harold)

“We ended our year very successfully with the partnership [with Beverly Hills police], and the armed security that we do have at each of our schools,” Bregy said at the last City Council study session.

On May 1, the district’s Board of Education approved a five-week exploratory program with Nastec International to provide full-service security at all five school sites, while planning to field long-term proposals from other security providers.

Communities across the country have been looking for ways to bolster school security after multiple school shootings recently, including the Feb. 14 shooting in Parkland, Florida, that left 17 dead.

“Our short term goals are looking at next year for armed security,” Bregy continued. “We are going out for a [request for proposal] for several different organizations, if they’re interested, to look at our project and to bid on armed security to begin the 2018-19 school year.”

Mayor Julian Gold said he wanted to make sure the district properly vetted the security companies it considers, because there are potential hazards.

“One of which is that kids don’t get caught in a crossfire, or that somebody who’s shooting a gun actually knows how to shoot the gun,” Gold said. “I would just hope there’s a fairly comprehensive way you guys are going to vet whoever it is you’re going to put through this RFP process.”

The cost for six armed security guards stationed at the district’s five campuses was approximately $14,000 per week, Bregy said. Other short-term measures include limiting points of entry at the school sites to better monitor the people who come and go.

Bregy said the district’s long-term goals include a “layered security approach,” which would include mental health components.

“That’s a critical point for meeting the needs of where our kids are, especially with the different things that could happen during the day and during the evenings,” he said. “The school board has already added two additional school counselors so we are fully staffed at our four K-8.”

“I think where we can do a better job is working on that preemptive layer, especially with the social media and working together with the police department to identify those areas in individuals or places in the city where our kids are that are most vulnerable,” Bregy said.

CCTV cameras near the schools were part of a pilot program launched by council members earlier this year, and they said they hope cameras will eventually cover the whole city.

“City and district staff have been working closely to develop a comprehensive implementation plan for camera deployment, and good progress has been made to date,” Beverly Hills Police Chief Sandra Spagnoli, director of Information Technology David Schirmer and Director of Community Services Nancy Hunt-Coffey said in a report to the council.

The city and district will work together on placing additional cameras on the five campuses, coordinating the work with ongoing district construction.

“Quarterly deployment schedules will be developed that detail district-wide camera installations. A detailed deployment schedule will be presented to the City Council and community in the future,” Spagnoli, Schirmer and Hunt-Coffey said in their report.

Bregy said the plan would be “a very interconnected model.”

“Over a month ago we shared a draft timeline and also some cost sharing information with you, and we are still shoring up some of those numbers and the timeline,” Bregy said.

The superintendent added that more information will be available in August.