Decades ago, as a 19 year old in West Hollywood’s burgeoning LGBT community, Mayor John Duran discovered the lights, music and men dancing in a communal horde every weekend at the Studio One nightclub on Robertson Boulevard. For the first time in his life, he had found “his tribe.” 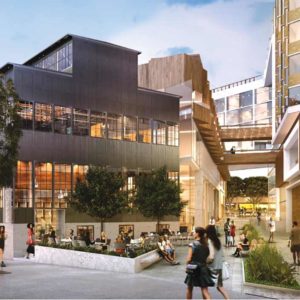 A rendering of the completed project shows the revitalized site of the Factory Building. (photo courtesy of the city of West Hollywood)

“We found a sanctuary, we found our home, we found a safe place, we found something that would change the rest of our lives,” Duran said at the City Council’s first meeting this month. “And it was in a bar.”

By a 4-1 vote last week, the City Council agreed to move forward with plans to convert the historic Factory Building that housed the club, and surrounding area, into a nearly two-acre, 258,000 square foot and 241-room hotel project – including retail, nightclub and restaurant space – standing approximately 114 feet and up to nine stories. It’s located at 661-665 Robertson Blvd. and 648 La Peer Drive.

With the intent of the developer to preserve the Factory Building and pay homage to its past, many residents told the council they’re excited for the development’s future.

“A lot’s changed,” Duran said. “What hasn’t changed, though, is the nightlife of West Hollywood. And I watch it when I walk up and down Santa Monica Boulevard and Robertson, and I see the young people, LGBT, some looking as queered-out as I know I was back in that period of time.”

Except the once-reclusive gay bar culture of Studio One’s era has adapted with advances toward inclusivity, especially in cities like L.A., making The Abbey and similar open-air venues the new norm. Duran said he notices the city’s LGBT residents hanging out in the open, sometimes with their straight friends, which represents a sea change from his youth.

“Our urban design and our urban planning has to reflect those changes,” he said.

The completed project will include sidewalks, seating, restaurants with open-air and outdoor areas and other outdoor spaces. The project’s applicant, West Hollywood resident Jason Illoulian, of the Faring real estate firm, said the new development will better connect pedestrians between areas such as Boystown and Robertson Avenue.

“I have deep roots in this city,” Illoulian said. “My office is here on Robertson, and I live in West Hollywood West. I’ve poured my heart and soul into getting this project right.”

It will take approximately 30 months to complete, but it’s still to be determined when construction will begin, city spokesman Joshua Schare saidPublic benefits that will be part of the project include an upfront payment of $4 million from the applicant for the city’s AIDS Monument, West Hollywood Park improvements and other community benefits.

Maintaining the Factory Building, constructed in 1929 to house the Mitchell Camera Company before it became Studio One in the mid-1970s, was an important preservation component of the project. Several years ago, the first iteration of the project called for its demolition. Adrian Scott Fine, director of advocacy for the nonprofit L.A. Conservancy, called it a “meaningful preservation.”

“We agree this is not perfect preservation,” he said, “but we do think it strikes an important balance in showing how you can preserve and retain an historic building while also allowing for new growth.”

“This is truly an ingenious example of economic development,” added Genevieve Morrill, president and CEO of the West Hollywood Chamber of Commerce.

Councilwoman Lauren Meister voted against the project, citing its outsized scale relative to the Melrose-Beverly District in the city’s general plan among her concerns.

“I’m not convinced that a nine-story building is what our constituents had in mind when writing this description of the Melrose-Beverly District, which includes Robertson,” she said.

Opponents of the project who addressed the City Council were mostly members or supporters of Unite Here Local 11, a union that represents hospitality industry workers in California and Arizona, saying they were concerned about workers rights and compensation.

“Please listen to the people who built the service industry, made it successful and will make this project successful,” said Frances Engler, an organizer for the union.

Council members broached a local policy to alleviate some of those concerns.

“We should be discussing a future framework for employment benefits so we have a standardized policy here in West Hollywood to work from, one that does properly engage all workers and is mindful of the kind of work that’s being done and the kind of compensation that workers deserve,” Councilwoman Lindsey Horvath said.

“This area really needs a big boost,” he said. “We heard from a number of businesses in the area how important this would be, what an important shot in the arm it would be to the Robertson area.”

Duran, also known in his early Studio One days as Jose Ramirez, the name on his fake ID, said the bonds forged on the dance floor during the club’s heyday helped his “tribe” persevere through the years that followed, when they were decimated by the AIDS epidemic.

The mayor said he has a personal request of the applicant: a going away party at the Factory Building “for the spirits of those who danced there, to release them into the ether, to let them go.”

“A going away party will remember them, and remember the times that we had there,” he said. “And the fact that we built a community out of a bar.”