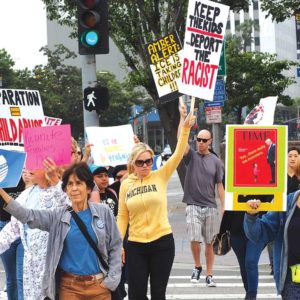 Protesters marched up and down crosswalks at the intersection of Westwood Boulevard and Veteran Avenue. (photo by Luke Harold)

The councilman joined state lawmakers, local activists, Rep. Maxine Waters (D-Los Angeles) and hundreds of protesters in front of the Federal Building in Westwood on June 23 in opposition to the president’s recent “zero tolerance” immigration policy. Trump rescinded the family separation component of the policy last week, and the Department of Homeland Security said it has begun reuniting more than 2,300 children with their families after they had been separated from their families upon illegally crossing the border into the U.S.

The event quickly drew national attention on social media, and in the news media over the following days, after Waters took the stage.

“Let’s make sure we show up wherever we have to show up,” she said. “And if you see anybody from that cabinet in a restaurant, in a department store, at a gasoline station, you get out and you create a crowd. And you push back on them. And you tell them they’re not welcome anymore, anywhere.”

Trump responded on Twitter, calling Waters “an extraordinarily low IQ person,” and several prominent Republicans and Democrats were quick to denounce any suggestion of violence toward members of opposing political parties.

“No one should call for the harassment of political opponents,” Senate Minority Leader Chuck Schumer (D-N.Y.) said June 25. “That’s not right, that’s not American.”

Koretz disagreed with that characterization of Waters’ comments. He said she wasn’t advocating violence, adding that “Trump and his team are misrepresenting facts with bald-faced lies and spewing horrible insults” at Waters.

“She was not calling for violent harassment as many are being misled to believe,” Koretz said in a statement. “She was calling for citizens to lift their voices and be heard against an inhumane policy of separation of families.”

Spokeswomen for Reps. Adam Schiff and Ted Lieu did not respond to requests for comment. 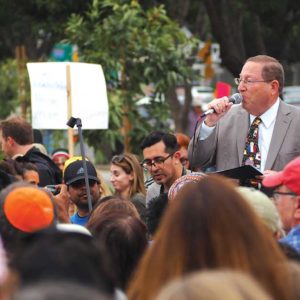 When Koretz took the stage after Waters, he told the crowd that the immigration policy is “worse than anything that we’ve seen since World War II.”

“And possibly even worse than the Japanese internment camps, because even there, children were not separated from their families,” he added.

The policy stemmed from law that predates the Trump administration, and the president’s team has blamed Congress for perpetuating loopholes in immigration law that led to the “zero tolerance” crackdown.

Nick Melvoin, vice president of the Los Angeles Unified School District’s Board of Education, said his great-grandfather came to America as a child escaping persecution.

State Sen. Ben Allen (D-Santa Monica) told the crowd he and his wife are expecting their first child in October.

“There’s something about having a child and knowing that as a parent, you are there to protect them, to be with them every single moment,” Allen said. “What we have done to these little children and to these families is just so inhumane, it’s so un-American, it’s so wrong.”

State Assemblyman Richard Bloom (D-Santa Monica) asked protesters to remember what it was like as a child when they were momentarily separated from their parents.

“These children and their parents are feeling that every minute of every day now,” Bloom said. “… This is obscene, it’s ugly, it’s outrageous.”

Actress Kristen Bell said the love of a family is “a universal human right.”

“Children are basic by nature,” she said. “They literally only have about three goals: to learn, to love and to explore, and they can do all of those frightening things because they have the unshakeable knowledge that they will always be able to return to the safety of their parents.”

According to Homeland Security, U.S. Immigration and Customs Enforcement has begun tracking and linking family members who are still apart, allowing parents who are detained to communicate with their children and working closely with foreign consulates to make sure parents and children have travel documents before their removal, among other steps to facilitate reunification.

However, Homeland Security confirmed there are still 2,047 children who are still separated from their parents. DHS has not answered questions about the logistics of enforcing Trump’s executive order.

Developer does some heavy lifting to renovate gym for Hollywood officers