Pride Parade is a piece of cake 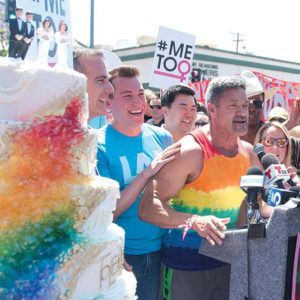 Last year’s Resist March was a one time event, but the parade’s opening press conference parodied a recent U.S. Supreme Court decision between a baker and same-sex couple.

Earlier this month, the court ruled in favor of Jack Phillips, owner of Masterpiece Cakeshop in Colorado and a devout Christian, who refused to create a cake for the couple’s wedding celebration in 2012 due to his religious beliefs. The court’s ruling affirmed LGBT rights, but the 7-2 decision sided with Phillips on the grounds that the Colorado Civil Rights Commission showed “hostility” toward him based on his religion.

Mendelsohn cut into a five-tiered white cake with a rainbow pattern striping the side, adorned with words such as “love” and “tolerance” and two same-sex couples perched on top.

“It’s time to cut the cake for equality because we believe in having our cake and our equal rights too,” said Estevan Montemayor, president of Christopher Street West. “The Supreme Court may be telling our community that their civil rights are up for debate, but we say, let them eat cake.”

The annual Pride weekend events, under the theme “just be,” featured performers such as the Grammy-nominated artists Kehlani and Tove Lo, and other artists who took one of the festival’s three stages.

The events were so popular that the festival grounds reached capacity, causing confusion and disappointment among people who had already purchased tickets.

“Thank you to all who came out to the first day of the 2018 LA Pride Festival yesterday,” read a statement from LA Pride on June 10. “We are sorry and would like to apologize to everyone who could not get in after the venue hit capacity.”

People with tickets or pre-purchased wristbands for Saturday that weren’t scanned at the gate were allowed to exchange them for a free Sunday ticket or request a refund.

LA Pride also announced on Sunday that it sold out for new ticket sales. Crowds along the parade route totaled in the hundreds of thousands, organizers said in a news release.

“Los Angeles has been the epicenter of the fight for equal rights for the LGBTQ community since the beginning,” Garcetti said. “And we’re continuing to lead, to push forward and to set an example of respect and inclusion for the nation.”

The weekend’s events also included the annual Dyke March on June 8, with marchers walking down Santa Monica Boulevard, to San Vicente Boulevard and back.

“It’s been 35 years since the word ‘AIDS’ was used for the first time and, since that time, we have witnessed countless stories of pain, sorrow and loss – as well as incredible hope, strength, and courage,” said Duran, sworn in as the city’s mayor last month. “We know that many people living in the city of West Hollywood and in the greater Los Angeles area have their own personal stories about how HIV/AIDS has impacted their lives. We encourage them to share their stories so no one will be forgotten.”