Police are seeking a male suspect who was seen on security cameras stealing a vehicle from a parking garage on May 21 in the 300 block of South Cloverdale Avenue. 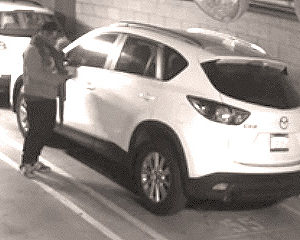 The suspect who stole a Mazda from an apartment building garage in the Miracle Mile was able to gain access because he found the keys in another vehicle that was left unlocked. (photo courtesy of the LAPD)

The suspect entered the apartment building garage by an unknown means and began checking vehicles for unlocked doors. After coming across an unlocked SUV, the suspect entered and searched for valuables. Inside were keys to a Mazda CX5 parked in a nearby space. The suspect used those keys to unlock the Mazda and steal the vehicle.

“If the first car had been locked, this guy would have probably kept moving. But once he was inside, it was a goldmine,” said Det. Sal Loera, coordinator of the Wilshire Division Auto Burglary Unit. “He didn’t even really have to look too hard. He just moved to the next car, opened it up and vanished.”

Wilshire Division auto burglary Det. Brent Hopkins said people often leave the keys to a second car inside their primary vehicle, but it is asking for trouble. Coupled with leaving a vehicle’s doors unlocked, it is a recipe for auto theft.

“I understand why people do that, but almost every person I’ve interviewed after a theft says the same thing, ‘I thought I was safe in my garage.’ It happens particularly frequently in apartment buildings,” he said.

Detectives hope someone with information about the theft will notify police by calling (213)922-8205. The stolen vehicle is a 2105 Mazda CX5 with the license plate number 7JES016. The suspect was black, approximately 20 to 30 years old, 5 feet 8 inches tall and 200 pounds, with a mustache and goatee.

“Don’t be lulled into a false sense of security,” Hopkins said. “You really can’t be too careful.”