Moore gets nod to become next LAPD chief

Los Angeles Police Department First Assistant Chief Michel Moore has been selected by Mayor Eric Garcetti as the department’s next chief of police. 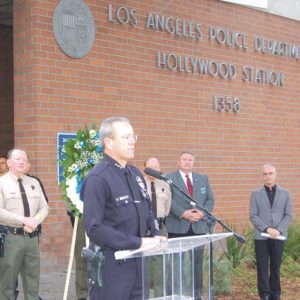 First Assistant Chief Michel Moore, who will become the next chief of police for the LAPD pending City Council approval, recently addressed officers from the Hollywood Division prior to a memorial bicycle ride that began at the police station. (photo by Edwin Folven)

The appointment of Moore, a 36-year LAPD veteran, must still be vetted by the Los Angeles City Council. He was selected by the mayor over two other candidates – current Deputy Chief Robert Arcos and San Francisco Police Department Chief Bill Scott, who left the LAPD approximately one and a half years ago after serving with the department for nearly three decades.

“Mike Moore is the right leader at the right time to accelerate our progress in bringing crime down, deepening trust between officers and our communities, and improving working conditions for our rank-and-file,” Garcetti said. “His experience, strong character and commitment to the demands of 21st century policing will serve the people of our city well. His leadership will strengthen a department that’s considered a North Star for law enforcement worldwide.”

Moore, 57, is known as a consummate professional with an affinity for statistical analysis, Garcetti said. Current LAPD Chief Charlie Beck is retiring on June 27, his 65th birthday.

Moore was one of three finalists for chief of police in 2009 when Mayor Antonio Villaraigosa selected Beck. The other finalist, Jim McDonnell, later became chief of the Long Beach Police Department and was elected Los Angeles County sheriff in 2014.

The three finalists for chief in 2018 had been selected by the Los Angeles Police Commission from a pool of more than 30 candidates, many from the LAPD.

“I am deeply humbled by the opportunity to lead the extraordinary men and women of the Los Angeles Police Department and to serve the people of this city as its next chief of police,” Moore said. “Together, we will do our part to keep the momentum going in reducing crime, enhancing public safety, building the confidence of our communities in this department and living up to our values of compassion, understanding and trust.”

It is unclear whether there will be organized opposition to Moore’s selection. Melina Abdullah, professor and chair of Pan-African Studies at California State University, Los Angeles, and a leader in the Los Angeles-area Black Lives Matter Movement, tweeted that Moore is part of the “leadership” that has “made the LAPD the most murderous police department in the nation.”

Moore, who is of Basque descent but is listed on LAPD rosters as Latino, was selected over Arcos, who is Latino, and Scott, who is black. Moore, whose first name is spelled Michel but pronounced Michael, rose through the ranks of police officer, detective, sergeant, lieutenant, captain, commander and deputy chief before becoming assistant chief to Beck. He has overseen operations in the Rampart Division, as well the San Fernando Valley and West Los Angeles. Moore has also been involved with LAPD operations regarding counter-terrorism, use of force, personnel, training and management. He currently oversees the department’s Office of Operations.

“I congratulate Michel Moore on being selected as the next chief of the Los Angeles Police Department. I look forward to confirming his appointment and working closely with him to make our neighborhoods safer in the 13th District,” Councilman Mitch O’Farrell said. “His decades of experience within the LAPD will serve him well. He has a comprehensive understanding of issues related to crime and community relations, combined with a vision for the future of the department. I am confident in his ability to lead the women and men in uniform while employing a data-based strategy of reducing crime across our city.”

“After a number of hearings and community meetings with the Board of Police Commissioners, and having spoken personally with all three candidates for the post, I am confident Michel Moore will lead the 9,000 officers of the Los Angeles Police Department to the benefit and safety of all our Los Angeles communities,” Councilman David Ryu, 4th District, said. “I thank Chief Beck for his more than 40 years of service in the department and his courageous and thoughtful leadership which made our city safer. I look forward to working with Assistant Chief Moore on continuing community policing, expanding HOPE team outreach for those experiencing homelessness and protecting our immigrant communities that Chief Beck made department priorities.”

”I couldn’t be happier at this week’s announcement that the mayor has chosen Michel Moore as the new chief of police,” Koretz said. “As assistant chief for the Office of Operations, he has been the driving force for positive change in the Los Angeles Police Department and he has the full faith and trust of the rank and file. I have known him for many years and I think he has a lot of really good ideas about improving the force including how to reduce officer related shootings with better de-escalation practices. I look forward to voting for his appointment when it comes to council for a vote, as I very much look forward to working with him in his new role.”

If approved by the Los Angeles City Council, Moore will become the 57th chief of the LAPD. The council is expected to make a decision prior to Beck’s last day with the department on June 27.