A plethora of dining options, an influx of new residents and the entertainment industry are some of the defining characteristics of Hollywood, a new survey shows. 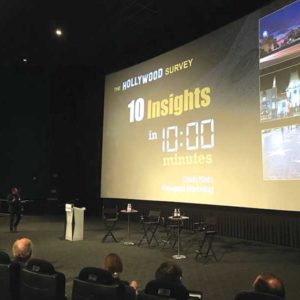 “The Hollywood residents are knowledgeable and passionate about the community,” said Leron Gubler, president and CEO of the Hollywood Chamber of Commerce, which commissioned the survey.

The chamber announced some of the survey’s results at its June 21 meeting, and the complete results will be released in July. The purpose of the survey is “to better understand the composition of community members, their attitudes and behaviors and how to most effectively fulfill their needs.”

Gubler, who has led the chamber since 1992, said Hollywood has “evolved tremendously” since he took over.

“Hollywood attracts more than its share of food/dining out purchases, while lagging behind in retail,” the chamber’s report, conducted by Renegage Marketing read. “Shoppers indicate that the retail experience in Hollywood does not measure up to other nearby areas.”

The Grove, the newly renovated mall in Century City and the renovations still taking place at the Beverly Center represent some of the top competition other areas of the city are facing in retail. The city of Beverly Hills last year changed its longtime tradition of businesses closing early in the evening to accommodate a series of BOLD (Beverly Hills Open Later Days) events to keep businesses open later and attract more residents and tourists. The growing online retail sector continues to present challenges for brick and mortar stores.

The chamber also noted that young adults moving into the 90027 and 90028 area codes have fueled Hollywood’s growth.

“While expansion is mostly seen as a positive, there are certain concerns that come with a rapidly growing community, namely the potential loss of Hollywood’s unique personality and the crowding out of existing residents as demand for housing increases,” according to the chamber’s report. “As Hollywood continues to expand, it will be critical to maintain the area’s persona. Wherever possible, effort should be taken to emphasize how new residents, businesses and visitors each contribute to what continues to make Hollywood a one-of-a-kind location in Southern California.”

“The entertainment industry is deeply woven into the fabric of Hollywood,” the report stated. “So much so that for many, Hollywood is the only option when seeking out various forms of entertainment, especially movies, concerts, plays and comedy shows. Hollywood entertainment offers a distinct experience that attracts workers and visitors as well as residents.”

Forty-nine percent of respondents agreed that Hollywood is headed in the right direction, compared to 22 percent who disagreed. Issues such as homelessness, parking and safety were some of the issues mentioned by respondents.

“Hollywood can benefit from collecting feedback, identifying manageable solutions and implementing them in an honest and sincere manner,” the report said. “Wherever possible, find unique ways to demonstrate progress.”

Gubler, the longest-serving CEO in the history of the 97-year-old Hollywood Chamber of Commerce, announced in January that he will retire by 2019. The chamber has credited him for building Hollywood into what it is today after the area had fallen on hard economic times. The survey, he said, could help build a better future.

“The survey gave us some great information,” Gubler said. “We hopefully will be able to use this data to assist us.”