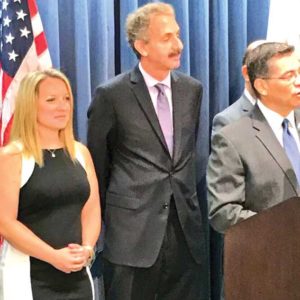 (From left) Councilwoman Lindsey Horvath, L.A. City Attorney Mike Feuer and state Attorney General Xavier Becerra spoke about the risks posed to minors by tobacco products, and how the grant recipients will tackle the issues. (photo courtesy of the Los Angeles city attorney)

“I want to underscore one of the key points,” Feuer said at a press conference this week. “As we talk about tobacco use and ecigarette use, let’s be specific. Here in the Los Angeles region, about 4 and a half percent of our youth smoke combustible cigarettes. But almost 17 percent have been vaping e-cigarettes. This is a huge issue for us.”

The Los Angeles Unified School District’s Beyond the Bell Branch will receive $4.2 million to train school resource officers and school safety personnel in high schools on enforcement of tobacco-free policy, and install signage or air quality detection devices at schools. It will develop a taskforce and increase student involvement in healthy choice advocates programs.

The city of Beverly Hills was awarded $305,810, and will conduct a tobacco outreach and and awareness campaign, hire tobacco-dedicated ambassadors and install tobacco signage in public areas.

Man sought for hate crime in attack against transgender woman