Lawyers and judges will make music together at Walt Disney Concert Hall on Saturday, June 16, at 8 p.m. during a performance of the Los Angeles Lawyers Philharmonic and its chorus, Legal Voices. 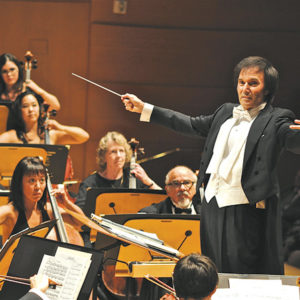 The concert celebrates the philharmonic’s ninth season and raises funds for people who cannot afford legal services. Actor Edward Asner will participate in the program. The philharmonic will be led by founder and conductor Gary S. Greene, Esq.

The concert will commemorate the 100th birthday of composer and conductor Leonard Bernstein and will include many of his most popular works including songs from “West Side Story,” “Candide” and “On the Town.” Asner will deliver a special narration as a tribute to Bernstein.

The program will also include music by composer Aaron Copland, and the orchestra and chorus will perform Tchaikovsky’s “1812 Overture.” Hon. John Mirisch will receive honorary membership and radio personality Bill Handel will serve as master of ceremonies.

Additionally, Asner will receive the June Lockhart Humanitarian Award, also known as a “Junie.” The award is presented annually by the L.A. Lawyers Philharmonic to an individual who has made significant contributions for the betterment of the world. It is named after Tony Award-winning actress June Lockhart, who is closely associated with the orchestra.

A Bernstein Centennial Champagne and Dessert Reception catered by Patina will follow the concert. The private reception will salute Bernstein, Asner and Mirisch.

Tickets to the concert start at $20; tickets to the reception are $150. The Walt Disney Concert Hall is located at 111 S. Grand Ave. For information and tickets, visit LALawyersPhil.org.