Los Angeles City Councilman David Ryu attended a landmark dedication in April at the site of a former Los Angeles processing center used in the internment of Japanese-Americans during World War II. 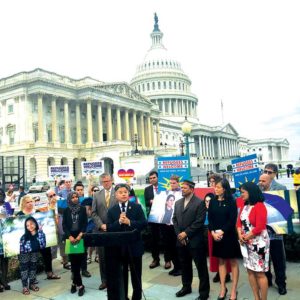 “This cruel treatment does not feel like history anymore,” said Ryu, 4th District, referring to the recent federal policy of separating undocumented immigrant children from their parents in certain circumstances after they cross the border and detaining them separately.

On Wednesday, President Donald J. Trump signed an executive order to keep families together as they go through the legal system after illegally crossing the border, ending his much maligned recent policy of separating children from adults, but retaining other components of the “zero tolerance” policy.

Attorney General Jeff Sessions announced the “zero tolerance” border enforcement policy in April and May, specifically mentioning that children would be separated from adults. Since then, California Democrats, including local leaders in the Los Angeles area, have berated President Trump and members of his administration as pictures and audio of distraught children, cages filled with detainees and protesters continue to circulate.

The policy stemmed from law that predates the Trump administration, and the president’s team has blamed Congress for perpetuating loopholes in immigration law that led to the “zero tolerance” crackdown. The policy has reportedly led to more than 2,000 children separated from “alleged adult guardians” between mid-April and the end of May. Previous administrations maintained more lenient criteria for whom to prosecute than the new policy does.

Los Angeles City Councilman Paul Koretz, 5th District, said “we remember [the Holocaust] so that we learn from the horrific atrocities that humanity is capable of.”

“What kind of nation are we if we stand by while refugee families are arriving here – fleeing inhumanity for a chance at the American dream and children are separated and forced to sleep in cages?” he said on Tuesday. “Refugees are not criminals. Children are not animals.”

West Hollywood Mayor John Duran added at a council meeting this week that “what’s happening along the southern border of the United States is wicked. There’s no other word for it.”

The outcry from public officials and a large percentage of U.S. citizens reportedly led to the president’s decision to reverse course on the policy.

Administration officials, including Press Secretary Sarah Huckabee Sanders, had cited the Bible to justify the policy.

“It’s a moral policy to follow and enforce the law,” Sanders said during a combative exchange with a reporter at a June 14 press briefing.

But U.S. Sen. Dianne Feinstein said she doesn’t want the U.S. to be “a country that traumatizes young children by separating them from their parents.” She and 31 of her colleagues in the Senate recently introduced the Keep Families Together Act, which would prevent the Department of Homeland Security from taking children from their parents at the border.

“Young children have been taken from their parents’ arms and federal law enforcement hasn’t given parents even the most basic information about their children’s whereabouts,” Feinstein said in a statement. “Congress has a moral obligation to take a stand and say that families should not be forcibly separated. Many of these families are fleeing terrible violence, traveling thousands of miles on foot for the chance to file an asylum claim and save their lives. To traumatize them further is unconscionable, and I hope that our Republican colleagues will work with us to put an end to this immoral policy.”

“Ripping children from the arms of their parents is not border security,” Sen. Kamala Harris added. “Our government should keep families together, not tear them apart. This policy can result in lasting trauma for those children and their parents. We can keep America safe without being callous.”

The bill has also been introduced in the House.

Homeland Security Secretary Kirstjen Nielsen said children were being separated from adults when the adult is suspected of human trafficking, when adults and minors are fraudulently posing as a family to avoid detention and when a parent is charged with human smuggling.

“Here is the bottom line,” she said during a June 18 press briefing. “DHS is no longer ignoring the law. We are enforcing the laws as they exist on the books. As long as illegal entry remains a criminal offense, DHS will not look the other way. DHS will faithfully execute the laws enacted by Congress as we are sworn to do.”

Nielsen said on Twitter that if families seek asylum at a legal point of entry, without crossing the border, they are not at risk of being separated. “We do not have a policy of separating families at the border,” she said.

“This lie is the last straw,” Rep. Ted Lieu (D-Torrance) tweeted in response. “I join [Harris] in calling on Secretary Nielsen to resign. It’s not just that [Nielsen] has a policy of ripping children away from parents, it’s her volume of lies about the new policy.”

Trump has blamed Democrats in Congress for the policy, but critics say the president is trying to gain leverage to get Congressional approval for the border wall he’s promised since his presidential campaign.

“Only after needlessly causing children and parents terrible trauma did President Trump finally do the right thing and reverse his inhumane rule,” L.A. City Attorney Mike Feuer tweeted on Wednesday. “Kids aren’t pawns, and cruelty is no substitute for sound policy.”

“It was the outpouring of people all over the world, but particularly people in America , that is beginning to change this policy,” Rep. Adam Schiff (D-Burbank) said on Facebook Live Wednesday afternoon.

In April, Gov. Jerry Brown accepted federal funding to add approximately 400 National Guard members statewide, but said they would not be used to build a border wall, detain people seeking entry into America for a better life or to enforce federal immigration law.

On Monday, state Sen. Kevin de Leon (D-Los Angeles) called on Brown to recall those troops, writing that California “can no longer tolerate using our state resources to support government entities that are inflicting human trauma.”

“This is a shameful chapter in American history and California should have no part in – directly or indirectly – imposing irreparable trauma on thousands of vulnerable young children,” de Leon’s letter said.