For the first time in four years, homelessness in the county of Los Angeles has decreased, according to homeless count results released last week. 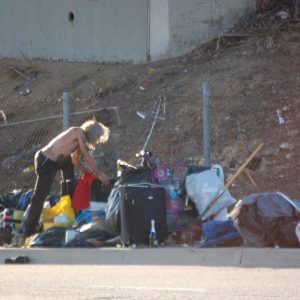 While the number of homeless people decreased in the most recent count, officials remain committed to finding solutions to homelessness. (photo by Edwin Folven)

“It’s encouraging, and indicates new resources voters approved are already having an impact,” Peter Lynn, executive director of the Los Angeles Homeless Services Authority, said in a statement. “We housed more than 16,500 people, the most our region has ever achieved. As the funds and programs from Measures H and Proposition HHH begin to reach more people and create more housing, we will continue building on this momentum.”

“A 3 percent reduction in the homeless count means we are on the right track, but this is no time to rest,” county Supervisor Mark Ridley-Thomas said in a statement. “We should use this momentum to accelerate our efforts to address what I consider to be the civic and moral crisis of our time, to scale up our compassion and innovation. These numbers are a call to action to every resident of Los Angeles County to join in the fight to end homelessness.”

There was also a 5 percent decrease in homelessness in the city of Los Angeles, with the number dropping to 31,516.

“The numbers from this year’s Homeless Count show real progress, even as we face the real challenges of tomorrow,” Mayor Eric Garcetti said in a statement. “Because for the first time in nine years, we finally have some good news. Just a few years ago, our approach to homelessness was dysfunctional – with too many government agencies that didn’t see themselves as a single team. But today, everyone is in, and we are pressing relentlessly forward until every Angeleno has a safe place to sleep at night.”

But a report by the Homeless Services Authority also noted that the driving forces behind homelessness, such as the lack of affordable housing and stagnant incomes, are still present. The homeless count showed an increase of newly homeless individuals, from 8,044 last year to 9,322 in 2018.

Three out of four homeless individuals are unsheltered, according to the report.

Critics of this year’s homeless count results point to the ubiquitous tent encampments, makeshift shelters and other signs of homelessness, questioning whether there’s been significant progress or promise for a downward trend in years to come.

“What makes this count not credible is what we see with our eyes every single day,” Michael Weinstein, president of AIDS Healthcare Foundation, said during a conference call last week.

The foundation recently launched its own plan to alleviate homelessness, converting a former 27-room Sunset 8 motel on Sunset Boulevard in Hollywood into housing for the homeless.

In Los Angeles City Councilman Mitch O’Farrell’s 13th District, the count showed a 10 percent decrease in homelessness, dropping from 3,322 in 2017 to 3,004 this year, the third-highest total among L.A.’s 15 council districts.

He added that the persisting signs of homelessness “just underscores how much work we have to do.”

“While we can’t declare victory after just one year of very modest improvement in our effort to combat homelessness, I still find it encouraging that we’re beginning to see progress,” Koretz said. “Now we need to do more to address the issue of people living on sidewalks, in tents and in vehicles. Those numbers rose, and those people are the ones we see in our neighborhoods.  This year’s challenge is to help them get into shelters and homes, and to deal more effectively with the criminal element hiding in their midst.”

Councilman David Ryu’s 4th District experienced a 3 percent decrease in its homeless population over the last year (781 to 754), the third lowest of L.A’s council districts.

“I am heartened to see a decrease in homelessness both in Council District 4 and the city at large, but it is not enough,” Ryu said. “If anything, these numbers should be a call to action to continue the work of building the housing and services we need to serve the tens of thousands of Angelenos without a home.”

Dress to impress at ‘Dapper Day’

Results are in for Natural History Museum’s City Nature Challenge