Hollywood resident honored as Veteran of the Year

Assemblyman Richard Bloom (D-Santa Monica) honored local veteran and Hollywood resident Mike Hjelmstad on June 20 for his service to the country and his advocacy work on behalf of veterans. 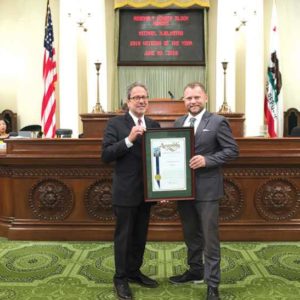 Hjelmstad received a special recognition at the 21st annual “Veteran of the Year” luncheon and received a resolution from Bloom recognizing his service to the veteran community.

“While we can never truly repay the debt we owe our veterans, it is important to for us to recognize our veterans for the sacrifices they made to protect our freedoms, not just on days like today but every day,” Bloom said.

Hjelmstad served in the U.S. Marine Corps from 1993 to 2009. He deployed to Iraq in support of combat operations during the global war on terrorism, acting as a combat correspondent and new media chief with the Marine Expeditionary Force. Since leaving service, he has used his experience to work as a military technical advisor on numerous films and television shows in Los Angeles.

Hjelmstad continues to work for service members and veterans as a leader and active member of the American Legion, including the first vice commander of Hollywood Post 43, commander of the 24th District, and as a member of the National Media and Communications Council.