A retired lieutenant who served at the West Hollywood Sheriff’s Station has been charged with obstructing justice for allegedly tipping off a massage parlor employee about police raids in exchange for sex or gifts, the Los Angeles County District Attorney’s Office announced. 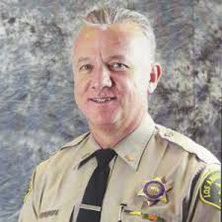 David Smith, 59, was charged with one felony count of conspiracy to obstruct justice and one misdemeanor count of obstruction of justice. He pleaded not guilty on June 8. According to a criminal complaint, the alleged crimes occurred between August 2012 and June 2017. The case stems from a sheriff’s department internal affairs investigation.

Smith was allegedly informed about an Aug. 14, 2012, enforcement operation conducted by personnel assigned to the sheriff’s department’s Vice/Human Trafficking Bureaus at Pine Therapy Massage at 8424 Santa Monica Blvd. During the operation, an unidentified employee allegedly agreed to an act of prostitution unrelated to the case involving Smith.

The criminal complaint against the defendant alleges that in 2016 and 2017, Smith paid for acts of prostitution at Pine Therapy Massage and at H2O Massage at 1011 N. Fairfax Ave. Smith allegedly visited both locations between April 13, 2017, and June 4, 2017.

Additionally, Smith allegedly called Young Kim, of Pine Therapy Massage, on June 4, 2017, and told her that law enforcement operations were imminent and the owner should “be careful and close for the evening.” It is unclear whether Smith allegedly tipped off employees at massage parlors prior to that date.

The criminal complaint alleges that Smith was interviewed by a sheriff’s department investigator on June 5, 2017. He allegedly initially told the investigator he visited the massage parlor on Santa Monica Boulevard on June 4 to tell the owner about upcoming street closures that could affect the business, and later called on June 4 to speak to the owner about a possible robbery. He later admitted to “frequently visiting” the location for “sexual purposes” and said he had advised Kim about possible law enforcement operations, according to the criminal complaint.

Deputy District Attorney Rachel Greene, of the Justice System Integrity Division, is prosecuting the case. It is unclear whether any employees or the owner of the massage parlors have or will face charges in relation to the case against Smith. The defendant retired from the sheriff’s department last September.

If convicted, Smith faces a maximum sentence of three years in state prison or jail. He was released pending court proceedings and is due to return to court on July 23.

Man gets 25 years to life for sexual assault in Hollywood