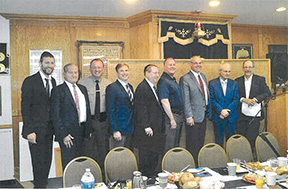 A standing room only audience celebrated at the 26th annual Breakfast at Congregation Bais Naftoli on June 10 honoring Morton Klein, president of the Zionist Organization of America, and Dr. David S. Frey, director of Holocaust and genocide studies at the U.S. Military Academy, West Point.

Klein received a standing ovation. He called upon the consuls general of Hungary and Germany, who were present, to urge their governments to move their embassies to Jerusalem, as the United States did.

Frey emphasized the importance of education in opposing ant-Semitism. His program teaches members of the military about the evils of the Holocaust so that similar genocide “never again” occurs.

Man gets 25 years to life for sexual assault in Hollywood