Developer does some heavy lifting to renovate gym for Hollywood officers

Personnel at the Los Angeles Police Department’s Hollywood Division have a newly remodeled space for exercise and workouts thanks to a $100,000 donation from Samir Srivastava, CEO and managing member of ABD Properties. 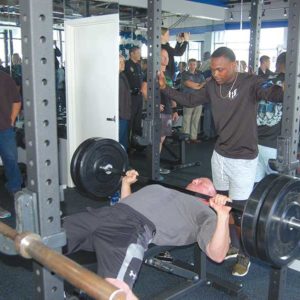 Officers from the LAPD’s Hollywood Division tried out the new weight-lifting equipment in a gym for station personnel that was renovated with private funding from a Hollywood developer. (photo by Edwin Folven)

The space in a building housing city offices at 6501 Fountain Ave. was unveiled on June 23 at a ceremony attended by Srivastava and Councilman Mitch O’Farrell, 13th District, as well as numerous officers and LAPD administrators. Officers lifted weights and tried out new cardio machines after O’Farrell and Srivastava cut a ribbon officially dedicating the new gym.

“Everything we have done here comes from a base of gratitude,” Srivastava said. “I live in Hollywood and see what is going on here and the things these officers face. It is very important for them to keep themselves physically fit. I am happy to help.”

Officer Tim Talman said the new gym is a big improvement from the previous facility, which had some free weights and some rudimentary exercise machines. The gym has a new weight lifting rack allowing multiple people to work out at once, two elliptical machines and a treadmill. The project also included removing a low ceiling and repainting the entire room.

“We appreciate the care and support we have from our community,” Talman said. “The outreach we receive is great. We are very thankful for the support.”

O’Farrell stressed that staying fit is an important component of physical well-being. He praised Srivastava for partnering with the station.

“Physical fitness is really where it’s at,” O’Farrell said. “I couldn’t be more pleased to be here. I will use this gym. I look forward to working out here. Physical fitness, mental well-being, making sure our police force feels better, that they are more efficient at law enforcement as a result, is really the purpose of being here.”

While the gym is primarily for officers, firefighters at LAFD Station 27 next to the police station and city employees, the possibility of opening the space to the public is being considered.

“One of the goals … is wellness and our ability to come here and be mentally healthy and physically fit. And to have a gym that allows us to work out before work or an hour after work is critical to our health,” said Capt. Cory Palka, commanding officer of the Hollywood Division. “As you know, injuries in policing are high and cost the city a lot of money. It’s very difficult when officers go out with injury. One way to prevent that is having a fitness center that is equivalent to the respect that we have for our cops.”

Talman added that the gym was renovated over the last three or four months, but the wait was worth it.

“It’s a great facility,” Talman added. “It really does go a long way in helping morale.”