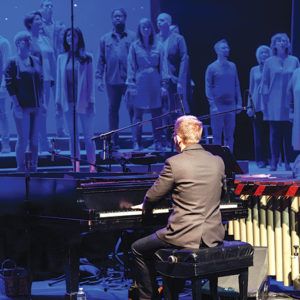 In October 1998, Matthew Shepard, a young gay student at the University of Wyoming in Laramie was kidnapped, severely beaten and tied to a fence. Five days later, Shepard died.

Approaching the 20-year mark of his death, acclaimed conductor Johnson has created a musical response to Shepard’s untimely death that seeks to both celebrate his life and explore humanity. Led on the piano by Johnson, this choral drama features the full 30-member Conspirare choir, a small instrumental ensemble and projected imagery.

Johnson sets a wide range of soulful texts by poets including Hildegard of Bingen, Lesléa Newman, Michael Dennis Browne and Rumi. Passages from Shepard’s personal journal, interviews and writings from his parents Judy and Dennis Shepard, newspaper reports and additional texts by Johnson and Browne are also appointed throughout the work.

These performances are a part of West Hollywood and WeHo Arts’ One City One Pride commemoration of the tragedy, which has become one of the touchstone moments of the American Civil Rights movement.

“It is an extraordinary privilege and honor to be able to bring this piece to Los Angeles and to many cities across the country. It feels essential and urgent that we share this message of love and inclusiveness in the midst of these challenging cultural times,” Johnson said.