The city of Los Angeles is taking more aggressive steps to address an encampment on Poinsettia Place north of Willoughby Avenue that has caused concern in the Melrose district. 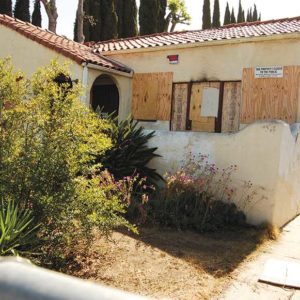 A vacant residence on Poinsettia Place was boarded up again after a fire erupted inside last week. The building has been a focal point of concerns about homeless individuals entering vacant properties and engaging in illegal activity. (photo by Edwin Folven)

Police officers are stopping by daily to monitor activity and ensure crimes are not being committed, and have been joined by social service providers from the Los Angeles Homeless Services Authority in an attempt to link people with services. The Los Angeles Bureau of Sanitation held another cleanup at the site on June 7 and city officials are directing more resources to alleviate concerns about activities that spill over into the surrounding neighborhood such as thefts, trespassing, lewd conduct, drug use, and urinating and defecating in public. While the encampment remained Tuesday across the street from Poinsettia Park, fewer people were gathered than before and most tents were collapsed during the day, as required by law.

“I am cautiously optimistic,” said Peter Nichols, founder of the Melrose Action Neighborhood Watch. “I do believe change is occurring. Enforcement has become routine.”

Nichols said neighbors are still frustrated, but are hopeful a recent push to limit the encampment’s impact will result in long-term change. Councilman Paul Koretz, 5th District, sent a letter to constituents late last week in which he promised tougher action to solve problems caused by the encampment.

“The situation around Poinsettia Park, specifically transients engaging in and displaying criminal behavior, has reached a critical level. I am advocating for our public safety agencies to bring every resource to bear to solve the crisis around the Poinsettia Park neighborhood. Additionally, I am calling on the LAPD to do whatever is in their power to remove the criminal element from the area,” the letter read. “I am advocating a zero tolerance approach to all criminal behavior, especially in areas near sensitive uses (e.g. parks, schools), critical infrastructure sites including those owned by LADWP and the high fire severity zones in our hillsides. With regard to the Poinsettia Park area, the incidents of criminal engagement and behavior being reported are not minor in nature, and I have therefore requested that the Los Angeles Police Department react swiftly and expeditiously to continue to maintain law and order. There are already laws on the books which address many of the issues plaguing the area around Poinsettia Park, including laws that address trespassing. For this reason and many others, I am also asking that the city attorney take a more proactive approach to enforcement by filing [charges] against individuals who are committing criminal offenses and endangering our neighborhoods.”

The Los Angeles City Attorney’s Office has assigned neighborhood prosecutor Claudia Martin, who has experience addressing issues involving homeless individuals in Venice Beach, to spearhead efforts in the Melrose district. Martin is working closely with the LAPD and Senior Lead Officer Inga Wecker, and has filed approximately 20 cases in recent weeks against individuals from the encampment for offenses such as drug possession, trespassing, vandalism and resisting arrest.

“We are also looking at the bigger picture,” Martin said. “We are working very closely and collaborating and bringing outreach. We are taking an all hands on deck approach.”

Martin said the city attorney’s office is also monitoring the issue of vacant houses in the Melrose district, which cause concerns because homeless individuals sometimes go inside and engage in illegal activity. The city attorney’s office works closely with the Los Angeles Department of Building and Safety and will take action against property owners if they do not comply with rules such as keeping structures boarded up and fenced.

One such vacant residence at 838 N. Poinsettia Place was the site of a fire last week. The site had been boarded up and fenced in compliance with city regulations prior to the fire. Inspectors went to the residence after the fire and the unidentified owner secured it again, said Jeff Napier, a spokesman for the Los Angeles Department of Building and Safety. The city attorney’s office would only get involved if the owner did not comply, and the situation has not reached that point.

The owner has filed an application to divide the property into five small lots and build a small house on each lot. The existing structure, which has been vacant for months, is nearing the end of the planning process, said Lauren Alba, a spokeswoman for the Los Angeles Department of City Planning. A letter of determination – a document either approving or denying the request – was expected to be issued this week, Alba said.

A notice of demolition has also been posted on the fence at the site, a precursor to it being razed. If the project is approved, officials anticipate the building will be demolished within 30 days – the period required for public notice.

Wecker said she also monitors activity at the site and other locations with vacant buildings as much as possible. People are cited or arrested for trespassing if officers find them inside the locations, she added.

Nichols said he hopes the vacant structure on Poinsettia Place is demolished as soon as possible and will continue to push for the city to take action at vacant properties and encampments.

“People are rightfully angry and disappointed in the process,” Nichols added. “It’s baffling.”

Man sought for hate crime in attack against transgender woman