Beaming with Pride in WeHo

Rainbow flags are proudly flying in West Hollywood and all throughout the county to celebrate Pride Month. However, it may be a few more years before the colors of the rainbow illuminate the White House again. 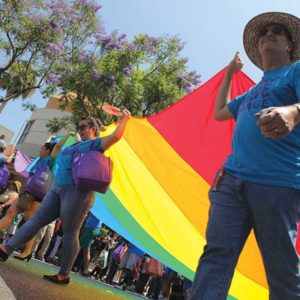 West Hollywood’s Pride celebration, pictured in a previous year, will bring thousands of residents and visitors to the city this weekend. (photo by Joshua Barash)

“It’s not surprising,” West Hollywood Mayor Pro Tempore John D’Amico said. “He’s off on some trajectory that is unrecognizable.”

Pride in West Hollywood is on its normal trajectory this year with the return of the parade on June 10, following a one-year hiatus in 2017 when the Resist March was held instead. The annual festival will be held June 9-10, starting at 11 a.m. both days at West Hollywood Park, along San Vicente Avenue and Santa Monica Boulevard.

Thousands are expected at the festival, which will have three stages – the Park Stage, the Plaza Stage and the Boulevard Stage, hosting performers including Kehlani and Tove Lo.

“It’s always a good time and I think this year will be no exception,” D’Amico said.

Estevan Montemayor, the newly elected president of Christopher Street West, the nonprofit that produces Pride, said the festival grounds have been impacted by park construction, but “it’s going to be fabulous still.”

“This really is a time for us to come together as a community,” Councilwoman Lindsey Horvath added. “With all the things that divide us, locally or nationally, this is a time for our community to be one.”

But in a chance prelude to this weekend’s Pride events, the U.S. Supreme Court ruled in favor of Jack Phillips, owner of Masterpiece Cakeshop in Colorado and a devout Christian, who refused to create a cake for a same-sex couple planning a wedding celebration in 2012 due to his religious beliefs.

“The case presents difficult questions as to the proper reconciliation of at least two principles,” read the majority opinion by Justice Anthony M. Kennedy. “The first is the authority of a state and its governmental entities to protect the rights and dignity of gay persons who are, or wish to be, married but who face discrimination when they seek goods or services. The second is the right of all persons to exercise fundamental freedoms under the First Amendment, as applied to the states through the 14th Amendment.”

In the 7-2 decision, the court ruled in Phillips’ favor on the grounds that the Colorado Civil Rights Commission inappropriately showed “hostility” toward him based on his religion. But Kennedy affirmed LGBT rights, and said outcomes in similar cases under other circumstances would have to “await further elaboration in the courts.”

“Our society has come to the recognition that gay persons and gay couples cannot be treated as social outcasts or as inferior in dignity and worth,” the majority opinion stated. “For that reason the laws and the Constitution can, and in some instances must, protect them in the exercise of their civil rights.”

West Hollywood Mayor John Duran said he doesn’t think the decision will “have a dramatic effect,” or give the courts a “license to discriminate” in the future.

“That’s not what this decision stood for,” he said.

Pride events this weekend will show what the city does stand for.

“Each year there are new people who come in and that is their first Pride, and it’s their first opportunity to be among a group of LGBT people and feel safe and welcome,” Councilman John Heilman said.