Animal Defenders International will host “An Afternoon Rescuing Monkeys and Lions” at SAG-AFTRA on June 30 from 3:30-5:30 p.m. 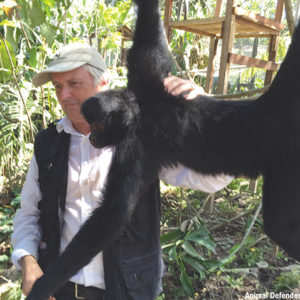 The spider monkey Pepe is one of the many animals rescued by Tim Phillips for Animal Defenders International. (photo courtesy of ADI)

The event will feature ADI President Jan Creamer and Vice President Tim Phillips, who will host a Q&A and report on the latest rescues. In addition, they will screen an episode of Animal Planet’s new “Dodo Heroes” series devoted entirely to an ADI rescue mission.

The show’s story begins when, after a law is passed in Peru banning wild animal circus acts, ADI is invited to help the authorities enforce the law. Operation Spirit of Freedom is born and a team headed up by Creamer and Phillips get to work, building a temporary rescue center from scratch, and traveling the length and breadth of the country to track down the illegal circuses and save every animal.

“This is a joyous and uplifting story about giving animals from circuses, who have endured so much, their lives back. We see what it means for animals to be reunited with their own kind, how the damage done by their captors can be repaired, and how when they are given space, they burst into life,” Phillips said. “It tells an important story about the treatment of animals but will also leave people smiling.”

The ADI team spends many months bringing the animals back to better health, allowing their true personalities to shine through. Plans are made for their relocation to their forever homes, and, for some, release into the wild. During the 20-month mission, more than 100 animals are rescued, including 33 lions, a tiger, mountain lion, four spectacled bears and over 30 monkeys. Many of the native animals were trafficked from the wild.

With a ban on wild animal circus acts passed in Guatemala, ADI is now working to rescue a number of big cats, who will be relocated to a new wildlife sanctuary it is establishing in South Africa. Proceeds from the June 30 event will go to ADI’s Guatemala rescue and sanctuary in South Africa. Tickets are $15.

SAG-AFTRA is located at 5757 Wilshire Blvd. For information, visit ad-international.org.