The city of West Hollywood has pulled the plug on shared electric scooters. The City Council voted on June 18 to ban the devices that have popped up in cities across the country, and also rejected a proposed pilot permit program to work with and regulate several of the scooter companies. 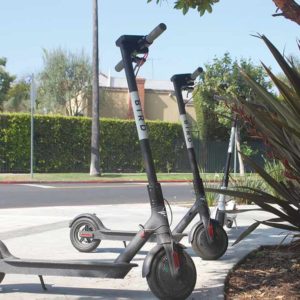 Shareable electric scooters are dockless and can be left in the middle of sidewalks or bike paths, causing safety concerns for local residents. (photo by Maura Turcotte)

The pilot plan presented at the June 18 meeting by the city’s departments of Public Works and Planning and Development Services would have banned all scooters and then distributed permits to three scooter companies for 50 devices each. Over the course of six months, the city departments would have collected data from the three companies and evaluated their performances in areas such as equipment safety, customer service and parking, and then reported the data back to the City Council. The council ultimately rejected the latter half of plan, choosing to just prohibit the scooters entirely.

With the ban in place, shareable scooters cannot be placed within West Hollywood for rental purposes, according to Deputy City Manager Oscar Delgado. The rental companies, once notified by the city, will remove any device that breaks the ban from the city, and could be penalized with a $40 impound fee. The fee’s amount and details of the ban will not be finalized until the council’s next meeting on July 9.

But Delgado said the scooter ban only extends so far. In early June, the Santa Monica City Council unanimously passed a 16-month pilot program working with rentable scooter companies, and the Los Angeles Transportation Department is considering a yearlong test program with the devices as well. The deputy city manager explained that people could still ride on scooters from those areas through West Hollywood and not face any consequences.

“There is nothing to stop someone from checking [a scooter] out in L.A. and riding it through our city,” he said.

Scooters by the company Bird debuted last September in Santa Monica, and inched their way into West Hollywood. In late March and early April, another company, LimeBike, launched its operation of scooters within West Hollywood as well, according to city staff. Neither company obtained permits from the city to offer their services.

Much like other ride-hailing services, the shareable electric scooters can be located and reserved via a smartphone app, and ridden for a relatively small fee. The devices are dockless, meaning once a rider is finished, they can leave the scooter anywhere. According to the companies’ rules, riders must be at least 18 years old, have a valid driver’s license, wear a helmet and not drive on the sidewalks.

However, riders don’t always follow those rules. Scooters have been found parked in the middle of sidewalks, some not always standing upright, and riders have been spotted speeding down sidewalks (the devices can reach up to 15 mph) without wearing helmets.

Several community members voiced their concerns regarding the safety of the scooters during the June 18 council meeting and advocated for the pilot permit program so that the city could heavily regulate the operations. West Hollywood resident Victor Omelczenko said any “technique that gets people out of their cars is a good technique,” but he didn’t like that the devices could be left anywhere. He said that during a recent bike ride in Venice multiple scooters obstructed the bike path, and he had concerns of a similar problem proliferating in West Hollywood.

“I have gone out of the path, I’ve gotten off my bike and had to put them against a palm tree or sand,” Omelczenko said. “Everybody was kind of weaving in and out.”

Manny Rodriguez, another resident, asserted any pilot program endorsing the shareable scooters would be a “detriment” to the city’s pedestrians and called for a complete ban.

“[These companies] operate on the false premise that these devices are a legitimate mobility option, that they help the environment, offer last mile transit, and reduce vehicular traffic … On-demand scooters are used exclusively for recreation and as a joy ride,” Rodriguez said. “We live in an environment with an active and busy pedestrian life – scooters, by design, will undermine pedestrian safety and confidence in that environment, and they will obstruct and clutter the public right of way.”

Much of the council seemed skeptical of the shareable scooters. Councilwoman Lindsey Horvath questioned how rules regarding the scooters could be enforced and how companies could be held accountable, as well as the impact on West Hollywood’s bike share program – which as she noted, the city had already made investments in.

Similarly, Councilman John Heilman pushed for the complete ban of the scooters, citing the fact the companies failed to follow proper procedures in setting up their services.

“I think it’s actually quite outrageous for a company to know that they don’t have permits to do this, to show up in a city and drop a bunch of scooters off on sidewalks and know that they’re not lawful, and think that’s an appropriate way to gain the favor of the community to support these devices,” he said. “If I showed up on a weekend and plopped a vending machine on the sidewalk as my business model because people are hungry on the sidewalk and they would buy things, would that have been legal?”

Mayor Pro Tempore John D’Amico was the only vote against the ban of the scooters and the only vote for the pilot permit program. He argued that in a few months, the initial excitement surrounding the devices would die down and they would be less of a nuisance for pedestrians.

“People are riding these into West Hollywood already and I’m definitely not interested in posting officers at the borders, telling them that they have to get off or what. I just think that’s an unreasonable thing to ask,” D’Amico said. “Ringing in my head is like, ‘Why do they have to play that rock ‘n’ roll music?’”

The mayor pro tempore called the council’s vote to ban the scooters without the pilot permit plan “short-sighted” and predicted that, as other cities establish relationships with the rentable scooter companies, the council’s decision will have to be remade in a few months. He noted, however, that in the meantime, private businesses could still establish relationships with the operators, so long as they park the devices on private property.

“I’m not sure what the issue was. It seemed like the other council members were just punishing the companies for not obtaining the permits,” D’Amico said. “We would have been in a better position to work with vendors.”