A 34-year Hancock Park resident in the 100 block of North Detroit Street, Helen Duffy liked that her street felt like “a neighborhood, right in the city” when she and her husband raised a daughter in their second floor three-bedroom apartment in the 1980s. 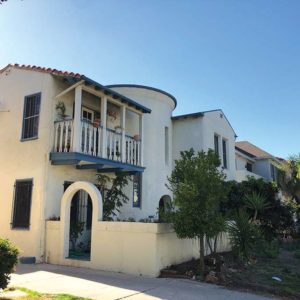 A growing number of affordable housing units, such as Helen Duffy’s on North Detroit Street, are being eliminated from the market with the Ellis Act. (photo by Luke Harold)

Their landlords were an elderly couple who lived on the first floor of the duplex, an owner-occupied arrangement that was more common in previous generations. When her original landlords died, their son sold the property in 2014 to Visemer De Gelt, including managing member Sol Feiner, for $1.2 million.

Duffy, 75, has remained in the apartment since separating from her husband, and after her daughter moved to West Hollywood. It’s where she’s battled eye cancer in recent years. She didn’t think her tenancy was at risk.

“I thought that being a good tenant, a long-term tenant, is an advantage for somebody,” she said.

But in December 2016, she received an Ellis Act eviction notice. It was the first time Duffy learned of the controversial state law passed in the mid-1980s to give landlords a way to leave the rental business, but in recent years has been blamed by tenants, landlords and local officials for allowing larger developers to empty affordable housing and make way for high-priced, luxury units.

When the act was passed, many experts said it would not be used for wide-scale evictions, according to a 1986 San Francisco Chronicle article. They cited the relocation assistance landlords are required to give tenants as an adequate deterrent. The article also quoted Dan Cohen, a rent control advocate and housing manager for the city of West Hollywood at the time, saying “it would be foolish to take advantage of the Ellis law … why go out of business if you’re in a hot real estate rental market?”

But the housing shortage and skyrocketing rents have motivated landlords to replace tenants like Duffy, who had been paying approximately $1,240 per month, to tear down their units and build newer ones for three or more times the rent. And the relocation fees have been a de facto cost of doing business, tenant advocates say. Landlords have said rent controlled units have inhibited their ability to keep up with the costs of their buildings, such as earthquake retrofitting measures required by local governments.

Ellis Act reform has eluded state lawmakers for years. The latest attempt by Assemblyman Richard Bloom (D-Santa Monica), AB 2364, fell short on the Assembly floor during a 25-36 vote on May 31, with no votes recorded for 17 Assembly members. The bill cleared two Assembly committees before its ultimate rejection.

The West Hollywood City Council had approved a resolution in support of AB 2364. According to the city’s data, 764 units in 203 properties have been removed from the rental market through the Ellis Act. Thousands of units in the city of Los Angeles have been removed as well.

Tenants have also claimed that landlords have used tactics designed to get them to leave their units. Duffy has a pending lawsuit in Los Angeles Superior Court against Visemer De Gelt alleging that the company shut off her water heater, removed her heater for two years and her oven for four months. When she remained in her apartment, the lawsuit alleges, she received her Ellis Act notice. But it had to be withdrawn “due to errors in the paperwork,” the complaint alleges. A new eviction notice was ultimately issued in March 2017, but was improperly backdated, inhibiting Duffy’s ability to file for a one-year period to leave her apartment instead of 120 days.

The lawsuit alleges that Feiner said he wants the property for his adult children to live, but that his intention is a “desire for profit” from reselling the building or developing more expensive units.

Visemer De Gelt’s legal counsel did not respond to a request for comment.

Duffy said she’d like to remain in the area.

“When I look at what rents are, it’s horrifying,” she said. “The transition is going to be very difficult.”