Worth its weight in gold on Wilshire

When the Academy Museum opens next year, it will showcase a history of motion pictures worth of photos, videos, costumes, screenplays and other artifacts. But preserving the building’s iconic exterior, including its gold mosaic at the corner of Wilshire Boulevard and Fairfax Avenue, has been the first order of business. 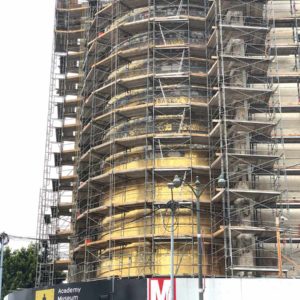 Once completed, the tower will maintain its historic appearance. (photo by Luke Harold)

Covered in scaffolding, crews have been examining every tile and panel in their effort to replicate the building’s original 1939 appearance. Originally the May Company Building, the landmark was hailed as “the western gateway to the Miracle Mile” when it first opened, according to the nonprofit L.A. Conservancy.

John Fidler, a building conservation expert on the project, is at the forefront of the exterior preservation.

The first step, before scaffolding, was to evaluate each of the gold tiles on the corner tower structure using Gigapan, a program that provided high-resolution images of the tiles. The 35 megabyte photos were detailed enough to show every hairline crack and every fly perched on a window ledge. The portions of the building covered in limestone, which came from Texas, were also scrutinized.

“We mapped, very precisely, where all the damage was,” Fidler said.

Approximately 1,000 of the 4,000 square foot gold mosaic was damaged, he said. The building’s original architectural records didn’t say where the tiles originally came from, but Fidler traced them to a studio in Venice, Italy, which confirmed that it had provided the original tiles. Each tile has 24-karat gold leaf and a gilded finish that provides its distinctive look.

“We wanted to replicate as best we could these minute details,” Fidler said.

As a historic cultural monument, the building’s construction has required close communication with the city of Los Angeles Office of Historic Resources. The City Council approved the project in June 2015, with then-Councilman Tom LaBonge saying it would be “an iconic addition” to his 4th Council District, Museum Row and the city. Construction on the museum began in October 2015. Work on the Dolby Terrace deck will begin this summer.

The museum reached another milestone last winter, when its 12-member board of trustees, including Hollywood legends Tom Hanks and Kathleen Kennedy, met for the first time. Its chair is Ron Meyer, vice chairman of NBCUniversal.

The museum’s $388 million fundraising goal received a boost last September after a $50 million donation from philanthropists Cheryl and Haim Saban. Three other large gifts brought the total to more than $300 million a month later.

Once it’s completed, the museum will house six floors of exhibition space, a movie theater, special event areas, a cafe and a store. One of its notable artifacts will be the only surviving full-scale model of the 1975 “Jaws” shark, which was on display at Universal Studios Hollywood at the time of the film’s release. A new spherical structure will have a 1,000-seat theater and rooftop terrace.

Fidler said he thinks the local neighborhood will appreciate the final result, which is in “the homestretch.”

“We’re very hopeful to complete this work by the fall on the exterior,” he said.