Police are searching for a male suspect who shot a victim on May 1 in the 300 block of North Vista Street, near Oakwood Avenue. 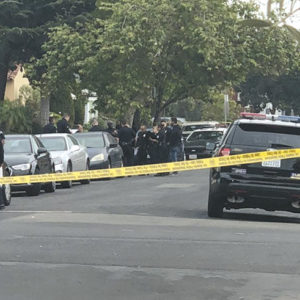 Police cordoned off a section of Vista Street on May 1 after a suspect shot a victim during an armed robbery. The victim is recovering. (photo by Peter Nichols)

The victim was taken to a hospital in stable condition and is expected to survive. The shooting occurred just after noon on a residential stretch of Vista Street just north of Beverly Boulevard. Police received a 911 call about the shooting and the suspect had already fled when officers arrived.

LAPD spokesman Chris No said a Hispanic suspect in his mid-20s approached the male victim, who was also in his 20s, and attempted to grab the victim’s property. A fight ensued and the suspect pulled out a handgun and fired once, striking the victim in the upper body.

The suspect was wearing a black hooded sweatshirt. No further information was available, No said.

“I’m numb. I don’t know what to say,” he said. “The fact that this happened in broad daylight at noon on a quiet street is concerning. I know they have been working up here and crime has gotten a lot quieter. We just hope this is a one-time thing and it’s not part of a new trend.”