Royal treatment for a royal wedding at Immaculate Heart

Proudly waving Union Jacks and American flags, ecstatic students and faculty at Immaculate Heart High School and Middle School toasted alumna Meghan Markle during a celebration on May 15, ahead of her marriage to England’s Prince Harry of Wales on May 19. The main focus, however, was on Markle’s own achievements as an actress and humanitarian. 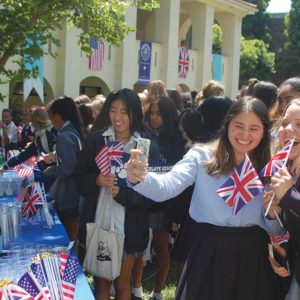 “We were proud of Meghan long before she met Prince Harry,” said senior Mia Speier, the high school’s student body president, to the crowd of students at the toast.

Speier and eighth-grader Stella Lissak, the middle school’s student council president, led the celebration, held on the school’s grassy quad after classes finished for the day. The school’s administration offered lemonade and shortbread cookies, as well as mini flags for the students to wave.

In their opening remarks, the pair shared Markle’s history at the schools – the soon-to-be royal attended both – and her social justice efforts since her high school graduation in 1999. Years before she landed a role on the TV show “Suits,” Markle participated in the school’s plays and musicals, and she also served as a leader for Kairos, the contemplative retreat for seniors. In 2015, the actress spoke at a United Nations conference on gender equality, declaring, “I am proud to be a woman and a feminist.”

Markle’s humanitarian pursuits have taken her around the globe. She traveled to Rwanda as a global ambassador for World Vision to support a clean water campaign in 2016, and in 2017, visited India to learn more about menstruation shaming and its impact on girls’ education.

“The idea that someone like Meghan has had an upbringing so similar to ours and she will now be able to voice her concerns on a global platform as an internationally recognized figure is a story that greatly impacts so many young women,” Speier said at the celebration. “Most recently, Meghan encouraged young women to use their voices. Actually, she said, ‘Women don’t need to find a voice, they have a voice. They need to feel empowered to use it and people need to be encouraged to listen.’”

“Here’s to Meghan,” Lissak declared, raising her glass of lemonade.

Following the toast, students danced to “Take on the World,” the theme song from the TV show “Girl Meets World,” and shared laughs with their peers.

“It is an honor to know that we’re walking on the same campus as Meghan Markle did,” said sixth-grader Kate Chalhub. “It feels like we could be as inspirational as her someday.”

Another Immaculate Heart sixth-grader, Ava Moore, called Markle an “idol” for her and other young women.

“Meghan is an underrated person and she should be celebrated way more because some people get less credit, even though they do big things,” she said. “She is going to use the power that she has to help out more and more, not only in her community, but in the rest of the world.”

Only two of Markle’s teachers from her time at the high school remain at Immaculate Heart. Maria Pollia, who taught Markle in a theology course, said the alumna was a “curious” student “who always challenged herself” to delve deep into the class material. Christine Knudsen, chair of the high school’s theology department, chose Markle to lead the senior reteat because she had “enough poise [and was] confident enough, articulate enough,” as the teacher explained.

“She would give 100 percent, and even though she was doing this and this, you never felt that, ‘Oh poor Meghan, she has so much on her plate.’ She had enthusiasm for everything. She was just a genuinely kind, loving, warm person who everyone felt comfortable with,” Knudsen added.

In “The Game Changers,” a book published in 2016 on successful women around the world, Markle called Pollia one of her mentors who inspired her as a student to continue volunteering at a soup kitchen in Los Angeles’ skid row despite her own uneasiness. “Life is about putting others’ needs above your own fears,” Markle recalled Pollia telling her.

“Meghan didn’t just go once [to the soup kitchen], she continued to go through her senior year, so much so that she was a real part of that community, and members of that community would tell me that she sits right down with people, she knows their names, she cleans tables, she serves food, she eats with them,” Pollia said. “She had the sense these people at the skid row kitchen were actually members of her own family.”

While Markle may be marrying into the royal family, Pollia believes that ultimately Prince Harry will be the one to benefit. Upon hearing the announcement of the couple’s engagement, the theology teacher recalled, “I looked at the screen and said, ‘Prince Harry, you are so lucky.’ There wasn’t a thought in my head that Meghan was lucky that she was marrying a prince – it was Prince Harry who was lucky that he’s marrying Meghan because I know who she is, I know about her depth, about her compassion, about her genuineness.”

The royal wedding will take place on Saturday, May 19, at St. George’s Chapel at Windsor Castle, outside of London. Due to the time difference between the United Kingdom and Los Angeles, the ceremony will air at 4 a.m. locally. Immaculate Heart will host a live viewing on campus that day.

For some, like sophomore Isabella Saborio, the early hour isn’t too enticing.

“I don’t really feel like waking up at 3 in the morning,” she said with a laugh. “I might try to catch it at a later showing.”

Many other students and faculty, however, are willing to brave the early calltime to watch Markle walk down the aisle.

“I want to watch it just to be like, ‘Wow, this woman who is getting married to royalty has been through the hardships of school – and of this very school,’” Moore said.