A male suspect wanted for hitting a victim in the back of the head and stealing a cell phone in a Best Buy store in West Hollywood on May 21 was arrested the following day by police in downtown Los Angeles. 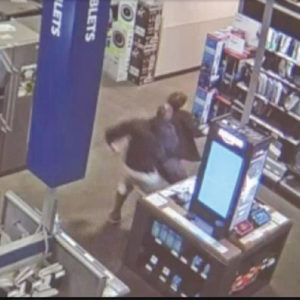 The assault at the Best Buy store was captured on security camera video. (photo courtesy of the LASD)

Darren Richmond, 37, was taken into custody by Los Angeles Police Department officers for a separate, unrelated assault. Shortly after the initial assault and theft, West Hollywood authorities distributed a wanted bulletin to other law enforcement agencies and a security camera photograph of the suspect was broadcast by numerous media outlets. Once Richmond was in custody, officers realized he was likely the same person involved in the West Hollywood attack and contacted investigators.

“LAPD recognized him and saw we were looking for him,” said Sgt. Jeff Bishop, with the West Hollywood Sheriff’s Station. “They will keep him in custody on the other charge and my detectives will work with them on our filing.”

Bishop said Richmond is believed to be a transient and the attack at the Best Buy store was unprovoked. Witnesses told detectives that Richmond was pacing back and forth inside the store near La Brea Avenue and Santa Monica Boulevard at approximately 7:50 p.m. on May 21 before he walked up behind the victim and struck him in the back of the head. After the victim fell to the floor, the suspect picked up the victim’s cell phone and fled on foot through an emergency exit. Deputies were unable to locate the suspect during a subsequent search.

Bishop said Richmond may be involved in another assault in Hollywood, but no further information was available. He added that finding and arresting the suspect was a priority.

“He is a wanted felon and I am glad we got him of the street,” Bishop added.

Anyone with information about the incident is encouraged to contact the West Hollywood Sheriff’s Station at (310)855-8850.

Suspects wanted for burglary at store in Beverly Hills