David Rhodes, a lifelong pianist with an extensive resume as a composer and performer, spent about five years giving piano lessons, driving around L.A. to his students’ houses. 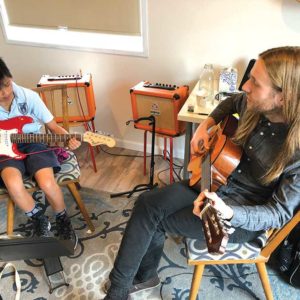 Fifth-grader Lily Roseme took a guitar lesson with Maxwell Gualtieri, one of the school’s instructors, on a recent Tuesday afternoon. (photo by Luke Harold)

“I like seeing kids making music,” said Rhodes, a Redding native who earned his MFA in the California Institute of the Arts Performer-Composer program. “It adds something really deep to the community.”

To further that mission, Rhodes decided he needed to spend less time in his car and more time teaching music to local children, and the Rhodes School of Music opened a brick-and-mortar location in Larchmont Village in 2012. As enrollment increased, the school quickly outgrew its relatively small confines. For the last year and a half, the school has been located in a more spacious second-floor studio at 215 N. Larchmont Blvd., where approximately 500 students take lessons from one of its 37 instructors.

“We just kept getting busier and busier,” Rhodes said.

With schools across the country cutting music programming under budgetary constraints, Rhodes’ school gives them an opportunity to develop musical talents that they might not otherwise have.

“It’s a subject that’s just as important as math and science and literature, but it isn’t necessarily viewed as such by school districts,” Rhodes said, adding that it helps “fill that gap.”

The studio has multiple rooms where students take their lessons, ranging from 30 minutes to an hour. The school mostly teaches children ages 5-12, but children of all ages, including teens and adults also take lessons there – free of the distractions surrounding students when they’re at home.

One recent Tuesday, fifth-grader Lily Roseme had a guitar lesson with instructor Maxwell Gualtieri, an L.A.-based composer and improviser. Students also come to the school for lessons in voice, piano, drum, trumpet, cello, flute and other instruments seven days a week. Each students’ curriculum is typically guided by their musical interests. The eclectic mix of students’ musical interests were on display last month during one of the school’s Second Sunday Concerts, when the set list included the White Stripes, David Bowie, Queen, John Williams and more of their favorite artists.

Students lately had been practicing for the school’s recital May 6, one of two it holds each year, when they have a chance to perform solo during one of seven one-hour sessions.

“The recital was spectacular,” Rhodes said. “Students of all ages performed and many kids played or sang with our faculty band, classical piano pieces, music from movies and popular music, their own compositions, and collaborations [or] duets with their siblings and parents. We had performances on almost every instrument and over 150 students performed.”

For children under 3, the school hosts a weekly songs and stories event on Wednesdays where they can sing and dance, play musical games and take part in other activities.

A career musician, Rhodes said opening the school has helped him become a “much shrewder business person.”

“The stakes are higher when you have rent to pay and faculty to pay,” he added.

The school’s Larchmont Village location, around the corner from its smaller previous location, is easily accessible by many parents in the local area.

“It’s a great place to be,” Rhodes said. “Lot of stuff you can do on this street.”