Art imitates life, but in this case art births a fantasy of the #MeToo movement complete with some Old Testament retribution. 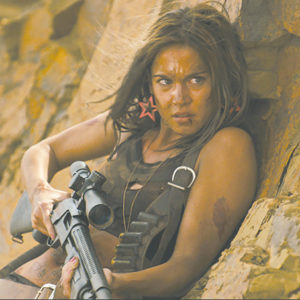 Matilda Lutz portrays Jen, a woman who strikes back against her assailants after being raped in “Revenge.” (photo courtesy of Neon)

“Revenge” is a particularly brutal rape-and-revenge film – not so much the rape part – but it also taps into current events quite well, offering a heavy dose of rage. And that’s just fine.

When we first meet Jennifer (Matilda Lutz), the camera accentuates her body. Short skirt, bare midriff, sucking on a lollipop. This is the male gaze at its most blatant. She exists to please her man, Richard (Kevin Janssens). The effect might seem intoxicating, but it’s all a ploy.

At an isolated getaway, the pair plan to simply enjoy themselves until Richard must host two unexpected guests. Jen makes due. She feels no need to change her demeanor, even dancing sultry with them. You can almost hear that one victim-blamer in the audience declare she has it coming. No, she doesn’t. Being nice, showing a little skin, getting freaky on the dance floor doesn’t mean more than that to men in healthy relationships. To entitled trash, that’s something else.

So, when creeper guest No. 1 Stan (Vincent Colombe) gets upset because her moves don’t lead to the bedroom, he rapes her. And creeper No. 2 Dimitri (Guillaume Bouchède) interrupts but does nothing to stop it. And when Richard finds out what happens, he wants to bury the incident. When Jen won’t comply, Richard pushes her off a cliff. Left for dead, impaled on a tree, Jen awakes, and a story of survival and vengeance begins.

“Revenge” hits all the marks: victim blaming, attempted compliance through silence and bribery in place of justice. While rape occurs, “Revenge” cares more about its title, establishing violation and then attempted murder as precursors to the film’s primary concern: a “Mad Max” revenge tale. The victim stage of the film is about as brief as all the dialogue in the film. 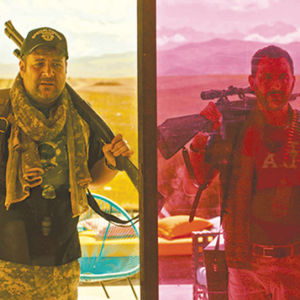 This is visual and quite visceral storytelling, beautifully stylized with a killer soundtrack by Robin Coudert – the film soundtrack is available under his performer name, Rob. First-time director Coralie Fargeat knows how to break some glass ceilings and make her characters bleed all over the place. That’s high praise for a film whose title makes a lofty promise.

Body horror basks in suffering, seeing the human form as pliable, willing to change under the right pressure. Cinematographer Robrecht Heyvaert primes Jen’s body for this, first establishing her as an object of desire, a trophy to admire, not to intellectually engage. But once bodily trauma begins, she transforms into something else, and the camera’s gaze seems less interested in her curves. She even experiences baptism by fire during a bad (or very good) trip. That said, she still spends most of the film in her undergarments, albeit dirtied and strapped with ammo and a utility belt, which she puts to use in clever ways. But she keeps her pink star-shaped earrings, while her blonde hair darkens from blood and earth.

Much of the dialogue belongs to the men, often complaining about this “troublesome” woman and what they must do to stop her. Their characters are cyphers for the different ways men allow rape culture to continue: the insecure man who feels he deserves sex, the charming one willing to do anything to avoid conflict and the passive coward letting terrible things happen in front of him.

With such generic male character, the film heavily relies on Lutz’s incredible performance. And it works. She barely speaks, which is often a problematic trend in films that feature a silent-but-deadly femme fatale. Here, the result differs. She needs no words, instead visually progressing as a self-actualized character. It mostly works.

“Revenge” is the thrash metal of feminism, an unlikely voice to the righteous rage that fuels far too many wronged women and girls. In a final tidbit, ex-boyfriend Richard complains that women “always fight back.”

Fargeat, who wrote the screenplay too, began shooting this project early last year, meaning it began to marinate a year or two earlier. So, the idea of “Revenge” predates current movements, reminding us just how systemic rape, assault and sexist behavior is. And sometimes we need to see bad behavior violently decimated.