The race for governor headlining the June 5 election has sparked plenty of debate over the future of health care, public education, immigration and other pressing issues in California. In the unsung race for Los Angeles County assessor, incumbent Jeff Prang states his case for re-election by first answering one question: What does the assessor do?

Contrary to popular belief, the assessor doesn’t collect taxes (that responsibility belongs to the aptly named county tax collector). The position’s primary responsibilities include locating all taxable property within the county and setting its taxable value. 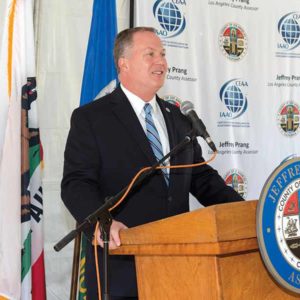 Prang, who became well-known locally as a councilman in West Hollywood, said he wants to better educate the public about the role of the county assessor. (photo courtesy of the assessor’s office)

If elected to a second term, Prang said he hopes to raise awareness of what the job entails and how it affects the lives of residents countywide. Revenue generated from the assessor’s property evaluations fund public services including law enforcement, health services, education and libraries.

In the last election, a scandal involving Prang’s predecesor, John Noguez, drew more attention to the county assessor race over issues of transparency and accountability.

Noguez was arrested in 2012 for allegedly accepting bribes from his chief appraiser, Arizona tax consultant Ramin Salari, to lower property values for Salari’s clients, saving them millions in property taxes. Noguez received paid leave for the remaining two years of his term. The case still hasn’t gone to trial.

“When I took over I had a pretty big task to restore public confidence in the agency,” said Prang, who worked for Noguez as an assistant in the assessor’s office.

Part of that task involved a technology upgrade, which has made the assessor’s office more accessible to residents. The new Assessor’s Portal on the office’s website allows access to records with a more user-friendly interface compared to the previous mainframe, green-screen system. The National Association of Counties gave Prang’s office an Achievement Award for the portal, and it was also praised by the Quality and Productivity Commission. In addition, more than 2 million property files that had only been available on paper have been digitized .

The assessor’s office has been a change of pace for Prang, who left the West Hollywood City Council in 2014 after winning his first term. Before leading the assessor’s office, his experience was primarily in municipal government.

Upon moving to California from Michigan at age 25, Prang joined the West Hollywood Democratic Club. Since then, he’s worked for the assessor’s office as a special assistant to the county assessor, for former Los Angeles City Councilwoman Ruth Galanter and the Los Angeles County Sheriff’s Department.

As a councilman, Prang said getting things done depended on factors such as gaining support from other council members, engaging the community and keeping up with constantly shifting priorities. As assessor, he has greater autonomy to set the agenda.

“My office is narrow but deep,” he said.

If he receives another term, Prang said he’ll continue to modernize the office’s use of technology, tackle issues such as more efficiently handling the backlog of appeals by taxpayers who disagree with their appraisals, continue outreach to educate residents about the role of the assessor’s office and take measures to help local businesses.

In the June 5 primary race for assessor, a nonpartisan office, three of Prang’s deputy assessors are challenging him: Krish Indra Kumar, Sandy Sun and John Loew. But Prang carries the key endorsements, including the county Democratic Party, Miracle Mile Democratic Club, Hollywood Chamber PAC and the L.A. Times editorial board.

“I hope I have the opportunity to do it for four more years,” he said.