It’s time to play ball at Pan Pacific Park after a refurbished baseball diamond and new soccer field were unveiled on May 12 under a plan to bring more recreational activities to the site.

The new soccer field was created at the southern end of the park, and one of the three existing baseball fields underwent extensive renovations. The new fields will allow the Los Angeles Department of Recreation and Parks to expand programs for youth. 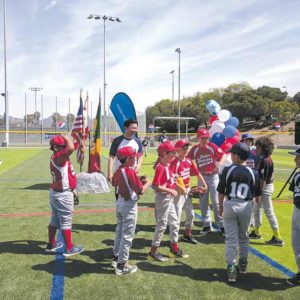 Park administrators are also looking into a schedule under which the fields will be available for use by community members, who will need a permit to use the field for organized sports. The fields were primarily created so the Pan Pacific Park Recreation Center can offer more organized sports programming and league play.

“Because they are brand new, we are in the planning stages,” said Sharon Nishihara, director of Pan Pacific Park. “We will be able to expand our baseball offerings and can now offer soccer and flag football. I believe there will be the potential for public use.”

The idea for creating the new fields dates back at least four years, said Department of Recreation and Parks spokeswoman Rose Watson. The plans were initiated when former Councilman Tom LaBonge represented the 4th District, and were completed by current Councilman David Ryu. Watson said it took years to find funding, study impacts on the environment, design the fields and then build them. The culmination of that work was evident on May 12 when Ryu joined city staff, community members and players from the Wilshire Warriors youth baseball program to dedicate the fields.

“City parks are central to our health, happiness and to building community,” Ryu said. “I am proud to have worked with the department and commission overseeing our parks to get these fields finished, and to continue working to make Pan Pacific Park the pride of Mid-City.”

Nishihara said the new fields add more greenspace to the park, which is in a densely urban environment. The baseball field has a new surface with improved drainage; refurbished lighting, bases and a new backstop; shade structures in the dugouts; and a new fence separating it from the soccer field. The Wilshire Warriors used two other newer fields at the park while the baseball diamond was under construction, and will play at the new field soon.

The soccer field was created from scratch in an area where the sport was formerly played on dirt. The size of its area of play can be configured to meet the needs of different soccer leagues and age groups, as well as for flag football.

The field was built with synthetic turf and a new drainage system. Amenities include bleachers with a shade structure, an electronic scoreboard, new lighting and storage bins. New landscaping includes four new trees.

The $2.8 million project was completed using funds from Proposition K, a voter-approved bond measure for recreational facilities, and Quimby fees, which are paid by developers for community benefits when projects are approved.

Nishihara said baseball programs will resume using the diamond in the short term, and the soccer leagues may be up and running by fall. The programs are run through the Pan Pacific Park Recreation Center, and she encouraged people to contact staff there for information about joining a league or using the fields.

“The fields are really nice. It’s going to be really big for the park,” Nishihara added. “It will make it so everyone has plenty of places to play.”