The Los Angeles Philharmonic Association has announced details of the menus for the 2018 Hollywood Bowl Food + Wine season. This year, the Bowl’s California-inspired offerings, which include over 17 concepts, will be created by four-time James Beard Foundation award-winner Suzanne Goin in tandem with the exceptional wine and beer programs curated by Caroline Styne, recent recipient of the foundation’s 2018 Outstanding Restaurateur of the Year award. 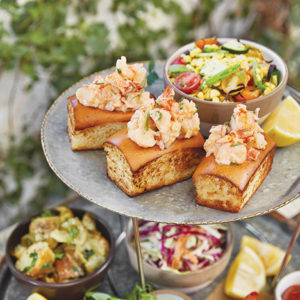 Enjoy a platter of picnic seafood at the Hollywood Bowl this season. (photo courtesy of LA Phil)

Additionally, this year concertgoers can skip the line before the concert and use the Hollywood Bowl Food + Wine mobile app and choose pizzas, barbecue, bánh mi, hot dogs and popcorn, and easily pick up their picnic on the way to their seats.

For the highly praised Supper in Your Seats, Suzanne adds her Susanita’s Carnitas Feast for Two as well as a new picnic box, the Maple Drive, slow-roasted prime beef tenderloin served with Early Girl tomato salad, roasted potatoes, wild mushrooms and a caramel chocolate brownie. For a grab-and-go option, Alex’s Veggie Sandwich – a tribute to Suzanne’s daughter Alex – will be found at all Marketplace venues.

Returning for the 2018 season is the well-received Winemaker Wednesdays series, an eight-week program of complimentary wine tastings at the Plaza Marketplace from guest winemakers hand selected by Styne.

The Hollywood Bowl is located at 2301 N. Highland Ave. For information, visit hollywoodbowl.com/foodandwine.