Of all the mother idioms, perhaps the most profound is “Mother knows best.” Especially when you consider successful businesses owned and operated by mothers. 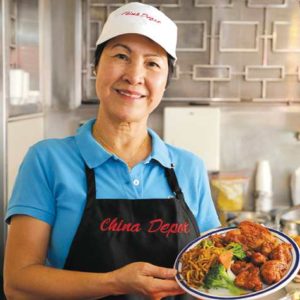 At the Original Farmers Market at Third and Fairfax, where family-run businesses abound, several are run by mothers. So how fitting is it to take mom to the Farmers Market on Sunday to enjoy a Mother’s Day brunch, browse the shops where you can buy her a gift, or pick up gourmet groceries to prepare her a home-cooked dinner. Coming together as a family is a Farmers Market tradition, and Mother’s Day is a particularly important time, said director of marketing Ilysha Buss.

“We have many mainstay market matriarchs,” Buss said. “I think it’s incredibly special that we have that at the Market. We have a family environment and many families working alongside each other.”

Some of the moms include Lilian Sears, a Latina immigrant who once worked the counter at Coffee Corner learning the skills needed to run a business. She never dreamed that she would later receive a loan from Gilmore Bank at the Market and become owner of Coffee Corner.

Sears taught her children the rewards of hard work and the commitment needed to run a family business. Customers can find her running the shop with her sister Norma. All of Sears’ adult children also worked by her side as teens and young adults before moving on to their careers.

Another mom at the Market is Helga Weiss, a German immigrant who co-manages the family business Weiss Jewelry, which was established by her late husband Leon at the Farmers Market in 1998. Weiss sells hand-crafted pieces with son Daniel and daughter-in-law Sara. The Leons perfected their craft in Germany and Helga loves working side by side with her son and daughter-in-law. She looks forward to one day passing the business on to her son and perhaps his three young children as well.

Angie Chang, a Chinese immigrant who previously ran the commissary at nearby CBS Television City for 20 years with her late husband Manny, is another Farmers Market matriarch. After they bought China Depot and enjoyed much success, the Changs also purchased Bryan’s Pit Barbeque. She is passing her business acumen on to her son David, who runs Bryan’s with his wife, Nicole. Chang still cooks and serves food at China Depot a few stalls away. Her daughter-in-law, also a mother of two young children, works at both businesses.

All of the merchants help make the Farmers Market feel like home, Buss added. The merchants at the Original Farmers Market are offering many products and prepared foods to bring families together over the Mother’s Day weekend. Additionally, Monsieur Marcel gourmet market and restaurant will feature an accordion player providing music, as well as a special Mother’s Day menu.