A 24-year-old man was arrested and charged with murder for a May 10 homicide in a smoke shop on Vermont Avenue in Koreatown. 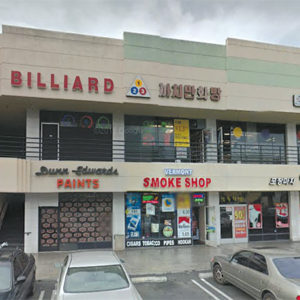 A man was stabbed to death in a smoke shop on Vermont Avenue. An employee was arrested and charged for the crime. (photo courtesy of Google)

The murder was reported at approximately 6:10 p.m. Police received 911 calls about a victim suffering from stab wounds in the 400 block of South Vermont Avenue. Officers found the victim, Jai Malik Carter, 23, of Inglewood, who was pronounced dead at the scene.

An investigation led police to the nearby Vermont Smoke Shop, where they located the suspect, Vardan Tokmajyan. Carter and Tokmajyan were involved in a dispute inside the shop, and Tokmajyan allegedly stabbed the victim. The suspect is an employee of the smoke shop.

“It was some sort of dispute,” said Det. Sean Kinchla, with the LAPD’s West Bureau Homicide Unit. “It was pretty quick. They responded to the call and found the suspect nearby.”

Kinchla said he had no further information about the case. Tokmajyan was booked for murder and bail was set at $2 million.