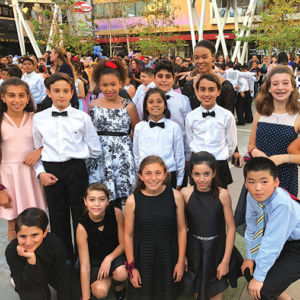 Fifth-graders at Hawthorne School in Beverly Hills placed seventh in a ballroom dancing championship competition on May 23 at L.A. Live. Hawthorne was the only school from the Beverly Hills Unified School District to compete in the finals.

At the semi-finals, held at Esteban Torres High School in Los Angeles, Hawthorne placed third to advance to the finals at L.A. Live. There were 12 schools from the Los Angeles area that competed. The program was run by Conga Kids, which utilizes a standards based program that teaches students five partnership dances. The dance curriculum develops students’ creative potential and sets a foundation of respect, teamwork, conidence and leadership.  For more information, visit congakids.org.